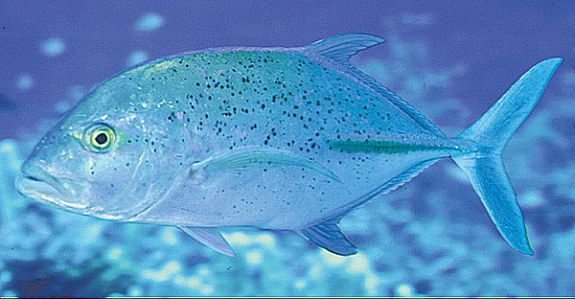 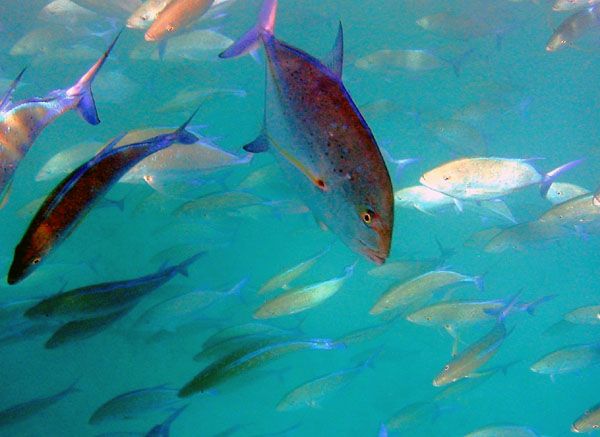 Bluefin trevally swim in an exhibit in the Aquarium’s Tropical Reef Gallery.

Indo Pacific ocean, Australia, New South Wales and the eastern central Pacific from Mexico to Panama. They are also found in waters around islands off East Africa.

Adult bluefin trevally are both coastal and pelagic fish. They inhabit coastal waters of reefs and rocky islands, peaks of outside outer reefs, channels and lagoons, and open water up to 190 m (623 ft) in depth. Juveniles prefer shallow inshore waters as their nursery until they are large enough to brave the open ocean.

The size of these fish varies with the geographic region where they are found.The maximum reported length of this species is 1.2 m (3.8 ft) with a maximum weight of 43.5 kg (96 lb). Most trevallly are smaller.

They are opportunistic, voracious, and aggressive predators preying during the day, primarily on fishes such as sardines, anchovies, and small mackerel. They also eat, crabs, shrimp and squid. They will eat anything that is not to large for them too swallow. They launch themselves at their intended prey at high speeds and they are also ambush predators, attacking from hiding places.

Bluefin trevallies are broadcast spawners. External fertilization occurs in the open ocean usually from May to August. Females are multiple spawners laying eggs as often as every five days.

These fish are strong swimmers often traveling long distances in search of food. Although they are usually solitary animals, they can be found in pairs or small groups. They are aggressive fish, sometimes taking food out of the mouths of feeding sharks.

Trevallies use camouflage for added protection from predators and to hide from potential prey. Their blue color helps them blend in with the clear blue waters of their habitat. They also are countershaded with a dark dorsal side and a lighter colored ventral side. If a predator is looking down from above, the dark back of the trevally blends in with the dark ocean bottom, but if the predator is looking up from below, the lighter belly of the trevally blends in with the glare of the sun and the light coming from above water. Waiting in ambush to attack prey they can change their coloration to a darker hue.

This species is safe for now. They are a target of both commercial and recreation fishers. Sportfishers favor them because of their ability to give a good fight when hooked. Research is now being done to determine suitability for aquaculture.

Small trevally are edible; however, when they reach a length of about 0.5 m (1.6 ft), they may become toxic and if eaten, may cause ciguatera poisoning in humans.

Bluefin trevally are members of the jack family, Carangidae, which includes jacks, jack mackerel, pompano, and scads. These fish are streamlined, aggressive in behavior especially when feeding, strong and fast swimmers, and beautiful in coloration. Usually solitary, they may also be found in small groups in shallow coastal water and in deep, open ocean habitats. The Hawaiian name for this species is omilu.