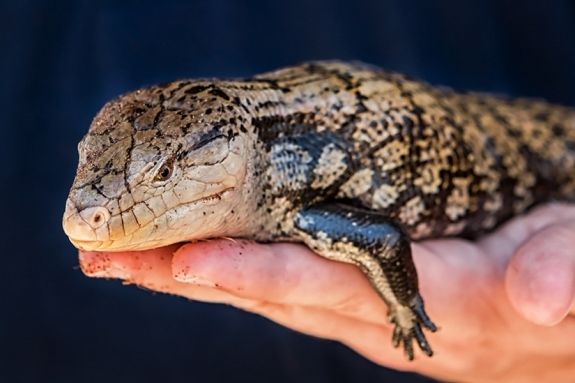 The Aquarium’s blue-tongued skink is one of the ambassador animals that participate in meet-and-greets at various locations around the Aquarium, including regular appearances at the Pacific Visions entrance.

This species is found in eastern, southeastern and northern Australia, excluding the arid interior, and on Indonesian Tanibar Islands.

These skinks can be found in a wide variety of habitats, from mixed woodland, scrublands, and coastal heaths to montane forests, cities, and gardens.

This large, robust, cylinder-shaped lizard has a wide, flattened head, fairly short legs, and a conspicuous blue tongue. The body color varies by subspecies. The upper body may be silvery-gray, yellow, brown, or black with irregular dark or pale cross bands on the body and tail. A dark streak from each eye to the ears may be present. The ventral side is white to pale yellow. The blue-tongued skink has relatively smooth skin covered in overlapping scales.

This species averages about 12 to 13 inches long (30 to 33 centimeters), not counting its tail. Measuring its full length including the tail, the total length of a blue-tongued skink is 17.7 inches (45 centimeters).

Blue-tongued skinks have an annual breeding cycle. They are ovoviviparous, meaning they produce eggs that hatch within the body of the parent. Offspring are born live in a clutch of ten to fifteen young that are 3 to 5 inches (9 to 13 centimeters) long. The estimated gestation period is three to four months.

Blue-tongued skinks are fairly slow moving but will run. They are active during the day and seek shelter at night, typically in other animals’ abandoned burrows. They are non-aggressive, but when disturbed, they stick out their blue tongue, puff up their body, and hiss loudly. During a confrontation, this animal can lose its tail, which it can regrow.

This species has adapted well to city and suburban habitats.

The blue-tongued skink is listed as a species of least concern by the International Union for Conservation of Nature (IUCN). They are federally protected in Australia.

Also known as eastern blue-tongued lizard, the blue-tongued skink is an elusive, non-aggressive, large, terrestrial lizard native to Australia. Aptly named, their tongues are blue. Body colors vary from silvery-gray, yellow, brown or black above with irregular dark or pale cross bands. Blue-tongued skinks sometimes have a dark streak from eyes to ears. Their ventral side is white to pale yellow. The blue-tongued skink is listed as a species of least concern by the International Union for Conservation of Nature (IUCN).