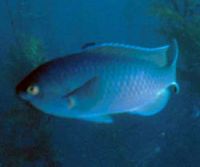 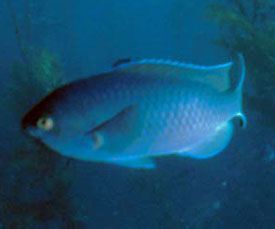 Our blacksmith are fed a mixture of small krill and chopped fishes, squid, clams, and shrimps. They live in the Honda Blue Cavern and Amber Forest exhibits.

Blacksmith are primarily inshore fish. They frequent reefs and are also found schooling under and around structures such as oil rigs. They may be found as deep as 82 m (269 ft) but are more common from the surface to 45 m (147.6 ft). Very young fish use kelp beds for a habitat.

The blacksmith is a perch shaped fish, elongate, but deep-bodied and compressed. The caudal fin is notched with pointed lobes.

Blacksmith are plankton feeders preferring zooplankton, including copepods, and the eggs and larvae of other marine organisms. Adults inhabit the in-current side of reefs during the day waiting for plankton to drift in, whereas juveniles usually stay close to the bottom near crevices where they can take refuge.

Blacksmith are believed to become sexually mature at about two years of age when they are just over 13 cm (5 in) long. Spawning takes place primarily during the summer months. The male prepares a nesting area where the female lays masses of salmon-colored eggs which he then fertilizes. Males guarding nests change from their usual gray blue to an almost white color with a dark band around each eye. The male guards the eggs aggressively until they hatch and the larvae disperse into the plankton population.

Larvae have been collected as far as 483 km (300 mi) offshore but they are mostly found within 160 km (100 mi) of shore. Juveniles usually first appear in schools in late summer and early fall. They are semi-pelagic but are often observed in kelp beds.

These fish are very gregarious. They school, sometimes in large numbers, typically swimming in open water well above the ocean bottom, feeding on plankton. During their resting hours from sunset to sunrise they gather in closely knit aggregations in caves, under ledges, in crevices, or in other protected areas.

Adults let senorita fish and several species of surfperch clean them. Juvenile blacksmith have been observed cleaning other fish.

Because of their small size blacksmith are not an important sport or commercial fish. They are rarely hooked by anglers because of their very small mouth but can be subject to spear fishing activity. They are sometimes sold in fish markets as part of a perch catch. The California Department of Fish and Game prohibits taking them in selected marine protected areas, primarily in no-take zones.

Blacksmith are subject to infection by the bacterium Vibrio damsella. Affected fish develop lesions on their sides and large numbers may die in late spring or early summer when the pathogen seems to have its greatest influence. It appears that other fish are not affected by this organism.

Blacksmith are members of the damselfishes family, Pomacentridae. Although most other damselfishes are found in tropical waters, the blacksmith and the garibaldi inhabit the temperate waters of southern California and the subtropical of Baja California’s west coast.