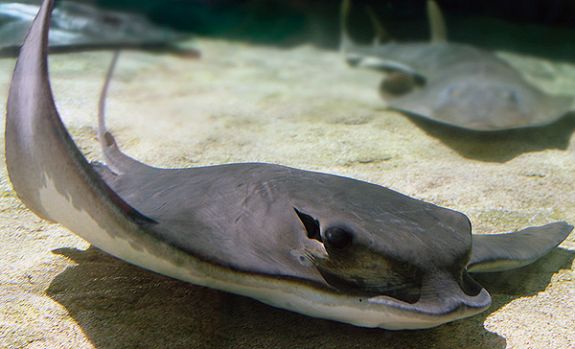 One of our bat rays in our touch pool. | Andrew Reitsma. Aquarium of the Pacific

These rays live in the Aquarium’s Ray Touch Pool.

Oregon to the Gulf of California (Sea of Cortez)

Bottom dwellers, they live on shallow, sandy, or mud bottoms from shallows to depths of 50 m (165 ft).

Bat rays have a flattened, triangular shaped body that is wider than long. Their raised head is partially distinct from their body with a broad, rounded, heavy jawed snout that has a projecting plow-like lobe. There is a hole called a spiracle behind each eye. Their long, whip-like tail has a small dorsal fin near its base and up to five venomous spines. They have pointed pectoral fins resembling wings. Like most other rays, the mouth of bat rays is located on the ventral (bottom) side. It contains broad, flat, fused teeth that form grinding plates. Two claspers used for mating are located on the underside of the base of the male’s tail.

These rays are brown to olive or almost black in color on the dorsal or top side and white on the bottom.

They feed on small bony fishes, snails, worms, shrimps, clams, abalone, and crabs. They explore the sandy bottom for prey by balancing on their pectoral fins and pumping their body up and down to create large depressions in the substrate. Once food is found, they plow it out with their heads and crush it with their plate-like teeth. Then, they spit out the entire animal and selectively pick out only the flesh to eat.

Females mature when five to seven years old and a width of about 90 cm (3 ft) and males at two to four years. During breeding season, bat rays come together in large aggregations with mating taking place in the late afternoon. A courting male swims in a synchronized movement below the belly of a receptive female and using spines above his eyes to maintain his position, inserts one clasper into the female to deposit his sperm.

After a 9-12 months gestation period, two to five pups that are 23-30 cm (9-12 in) wide are born live. They emerge tail first with their pectoral fins wrapped around the body. The spines of the pup emerging from the birth canal are pliable and encased in tough sheaths, preventing injury to the female during birthing. The spines harden and the natal sheath is discarded soon after birth.

Solitary except when in large aggregations to feed or mate, bat rays often bury in the sand with only their eyes and moving spiracles visible. If disturbed when hidden in the sand, they often emerge from cover to prop themselves on the tips of their pectoral fins with back arched in a ready-to-launch position. Then they may swim off with explosive speed.

Bat rays’ countershading, a form of camouflage, protects them from predators above and below. Viewed from above by a predator, a ray’s dark dorsal or top side blends into the dark ocean depths. In contrast, when a predator looks up from below, the white ventral or bottom side of the ray blends into the light coming from the surface of the water.

The first gill slits of these rays have evolved to form their spiracles which are used as intake valves. Water is taken in through the spiracles, passed over the gills, and expelled through the gill slits on the underside of the body. Gases are exchanged in the process. This adaptation keeps these bottom dwellers from inhaling sand.

Bat rays have electrosensory organs called ampullae of Lorenzini located on the underside of their head. They are able to locate prey by detecting the electrical fields produced by muscles and nerves of animals.

This species can live to 35 years of age. Females tend to live longer than males.

In 2015 the IUCN Red List of Threatened Species listed the bat ray as Least Concern based on the specie’s wide distribution range and large populations. The IUCN is the International; Union for Conservation of Nature and Natural Resources.

Bat ray is presently one of the many species considered, but not yet actively regulated, under the Pacific Fishery Management Council’s Groundfish Management Plan for the U.S. eastern Pacific. There are general restrictions on usage of certain types of commercial gear in the nearshore zone, which offers a good degree of protection for bat rays .

While not aggressive, bat rays can inflict a painful wound with their venomous spine. When entering waters where there may be rays, swimmers are advised to shuffle their feet through the sand, movements which cause buried rays to move away. The walk-in-the-water is called a “ray shuffle”.

The bat ray’s triangular pectoral fins are often called wings and compared to those of a bat, hence the common name. These rays swim gracefully by flapping their pectoral fins like birds. The fins are also used to hunt for food. The rays flap their pectoral fins in the sand to expose buried prey and then use their lobe-like snout to dig prey from their sandy bottom habitats. The venous spine (barb) on the bat ray’s tail is a modified dermal denticle; the structures that cover primarily the dorsal surface of most sharks and rays, substituting for the scales most bony fishes have. While the sting of a bat ray is painful, it is not usually serious.