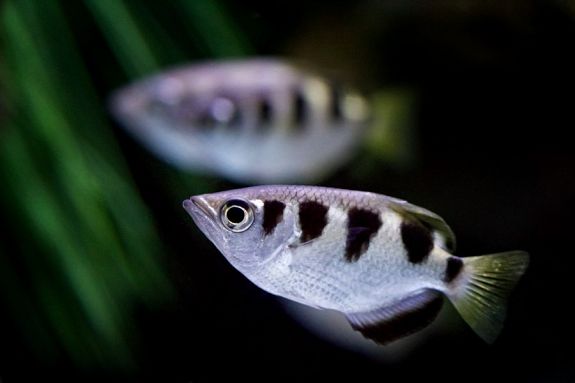 Visitors can see archerfish at an outdoor exhibit on Harbor Terrace and in the Coral Lagoon exhibit in the Tropical Pacific Gallery. The mysid shrimp our archerfish are fed are not scattered in the water. The aquarists place them on the glass and walls of the exhibit so the fish can practice their shooting techniques. Once a week they get to practice on crickets, a favorite food in the wild.

Coastal areas of India, across Myanmar to Thailand, Indochina and Southern China, the Philippines, and southeast Asia to Australia

Archerfish can exist in either brackish or fresh water. They typically inhabit coastal brackish mangrove estuaries where, because of their feeding habits, they are most often found in shallow, preferably murky, water.

Banded archerfish have a deep laterally-compressed body with a flattened head and back. Their dorsal fins, set far back toward the rear of the fish, have four spines. They have large, forward-set, movable eyes and an upward slanting mouth with a long protruding lower jaw that can be thrust out. They are usually an overall silvery color with four to five vertical black bands on the upper half of the body.

This species is commonly about 10 cm (4 in) in length.

Archerfish are unique in that they look outside of the water column to the surface for most of their food. They typically eat insects and floating vegetable matter but their diet also includes zooplankton, aquatic insect larvae, and worms. They have adapted their hunting techniques to be able to actually shoot down insects and other small prey resting on low overhanging mangrove branches when they cannot find food on the surface of the water. A central groove in the roof of their mouth and a thin tongue unattached at the front form a tube. Combined with strong jaw muscles and gill covers that assist in forcefully expelling a stream of water, the mouth acts like a water pistol. They are able to accurately shoot streams of water as far as 150 cm (5 ft).

They become mature at 1-2 years. They are believed to swim from their brackish water habitats out to coral reefs and coral rocks to spawn. Broadcast spawning is triggered by the rains that end the tropical dry spells. The female lays about 20,000-150,000 eggs that are about 0.4 mm (0.016 in) in diameter

These fish often hunt in aggressive fire teams of multiple fish shooting at a single target. Once the targeted insect has been knocked from its perch into the water, it is every fish for itself, and the quickest and closest wins the prize. The fish that shoots down the prey is not always the one that ends up with the meal, so archerfish appear to prefer leaping out of the water to grab the prey before another fish does.

Archerfish have numerous adaptations that contribute to their unique method of feeding. Their flat backs and rear-positioned heads allow them to swim directly under the surface of the water without being detected. They are also aided in avoiding detection by dark bands and patches of dorsal color which act as a form of camouflage when the fish is viewed from above, especially by birds. Adaptations to their mouth anatomy are critical to their ability to “shoot”. And, thus, to their survival.

Their large, forward-set eyes give them better binocular vision, an aid in depth perception when targeting prey.

What may be the most impressive adaptation of archerfish is their ability to learn to overcome the physics of the refraction of light passing from air into water. As the fish mature, they learn that there is less distortion of their vision of the target if they can position themselves directly beneath it. Younger fish that have yet to learn the technique are usually less accurate than older fish.

Their lifespan in the wild is about two years.

While the majority of archerfish species are fairly common, they are threatened by rapidly diminishing habitat due to the destruction of mangroves for aquaculture. They are also heavily collected for the aquarium trade. They are part of the human diet in some countries.

Sharp shooting archerfish were the inspiration for the name given the USS Archerfish, a submarine that served in the Pacific in World War II. From 1957 until her removal from service in 1968 she served mostly as a scientific research submarine. She received seven battle stars and one Presidential Unit Citation for her World War II service.

Archerfish serve as a fish patrol in Singapore’s Kew Gardens where they are kept in ponds of tropical waterlilies to keep down the population of insect pests and aphids.

The banded archerfish is one of seven archerfish species. This species usually inhabits tropical coastal brackish waters. They capture their prey from the surface of the water or outside the water column and they do so in a unique way. They “spit” a jet of water to shoot down an insect or other morsel. They can even target prey resting on low overhanging mangrove branches when they cannot find food on the surface of the water.