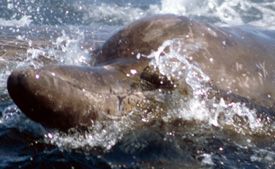 Due to the space requirements for these intelligent and dynamic animals, we do not exhibit live whales or dolphins. The voices of beaked whales can be heard in the interactive kiosks Whales: Voices in the Sea.

These deep water whales are usually found in the vicinity of seamounts and continental slopes in temperate and subarctic waters. They are nearshore only where the continental shelf is narrow.

Baird’s beaked whales have an elongated, slender, spindle-shaped body with a small head and long flat back. The middle of their body (girth) is typically 50-60 percent of the length. They have a pronounced bulbous melon (forehead) that slopes smoothly into a long tube-like beak similar to that of a bottlenose dolphin. The melon is broader and more bulbous in males. The long mouth line is curved upward at the back. The single blowhole is crescent-shaped. The dorsal fin, set far back on the body, is small and has a slightly curved (falcate) rear edge and a rounded tip. The small, rounded flippers are set toward the front of the body. The flukes, about ¼ of the whales’ body length, are not notched and have almost straight trailing edges.

This species is one of two beaked whales species that have two pairs of teeth. Both male and female adults have two large triangular teeth (tusks) that erupt at the tip of the lower jaw, which extends about 10 cm (4 in) beyond the upper jaw. The teeth are 9-10 cm (3.5-4 in) high and are exposed even when the whale’s mouth is closed. Stalked barnacles and whale lice often attach to the exposed teeth. A pair of concealed, peg-like teeth erupt about 20 cm (7.9 in) behind the exposed pair. The second pair of teeth is smaller, about 5 cm (2 in) high, and erupts later in life than the front pair. In older animals the teeth may be worn down to the gum line.

The color of their body ranges from slate-gray to brownish-black on the upper side fading to lighter shades on the under side. Patches of diatoms (single-cell algae) sometimes give their skin a brownish or greenish sheen. They often have cloudy whitish patches on the throat, near the umbilicus, and in the genital area. These patches may be slight or an almost continuous line on the belly. The skin of the melon, back, sides, and in older animals, the belly, is extensively scarred. In bright sunlight the teeth often appear to be a brilliant white against the whale’s dark body.

Baird’s beaked whales forage and feed at or near the bottom of the ocean at depths of 1000-3000 m (3,300-10,000 ft). Their diet includes squid, skates, ratfish, rockfish, and octopus, as well as pelagic fishes such as mackerel and sardines. They probably capture prey using suction since they lack teeth that can grasp or tear. When feeding, they typically stay under water for 30 minutes but can remain submerged for as long as an hour or more.

Little is known about Baird’s beaked whale reproduction. Males are believed to reach sexual maturity when they are 10-11 m (32-36 ft) in length and females, 10-10.3 m (32-34 ft). They mate in mid-summer in warm waters near Japan and California. It is believed that females give birth about once every three years.

They are social animals that live in close-knit formations of 3-30 animals, (occasionally 50) that often dive, surface, and blow in unison. Their blow is low, bushy, and difficult to see. When they blow, their melon and beak tend to jut above the water surface. Before making a deep dive, they usually blow three to four times at 10-20 second intervals.

Like other beaked whales, Baird’s have “flipper pockets”, slight depressions in the wall of their body into which their flippers can be tucked. This anatomic feature may be an adaptation to reduce drag.

One of the most interesting adaptations that beaked whales have is their teeth. Only one species has a full set of functional teeth. In another species both male and female have a full set of tiny vestigial teeth in the upper jaw that are embedded in the gums, not in bone, and a single pair of teeth in the lower jaw. The strap-toothed beaked whale male has two teeth shaped like straps that grow out of each side of the mouth, and then curve up and over the top of the jaw, preventing the whale from fully opening its mouth. The male ginkgo-toothed beaked whale has a single pair of teeth that are 10 cm (4 in) wide and shaped like a leaf from the Japanese gingko tree. The spade-toothed whale, known only from a partial skull and a tooth and jaw, got its name from the shape of its single tooth which is said to resemble the oblong flensing knife called a spade that whalers used to remove whale blubber from the carcass. In two species both males and females have two pairs of teeth. Most other known species have only one pair and females usually do not have any teeth.

Females are estimated to live 54 years and males, 80 years. This difference is unusual in mammals where females usually live longer than males.

The International Whaling Commission (IWC) does not classify or set limits for Baird’s beaked whales. The IUCN lists them as Lower Risk/Conservation Dependent. Currently, these whales are not considered to be “great” whales for which IWC does set quotas relative to scientific and subsistence whaling. Fresh or dried meat of Baird’s beaked whale is sought after in some areas of Japan. Under a coastal hunting quota set by the Japanese Fishing Association, 68 of these whales are killed annually between July 1 and September 20 to supply the demand.

These whales are subject to both chemical and noise pollution. Analysis for mercury in 60 tissue samples of animals killed in coastal hunting in Japan showed levels averaging 1.64 ppm (range 0.43-6.46 ppm). All exceeded the Japanese standard of 0.4 ppm. The marine environment is noisy naturally but the noise is intensified by sounds of human origin—widespread oil prospecting, shipping, and use of sonar in testing sea temperatures and by the military. Beaked whales appear to be especially susceptible to noise pollution. In March 2000 thirteen beaked whales stranded in the northern Bahamas where sonar was being used by the U. S. Navy. Laboratory examinations of the heads of the whales showed trauma induced by sound. There have been three other occasions in which more than five beaked whales stranded, all in areas where sonar testing was being done

Baird’s beaked whales are protected in the United States under the Marine Mammal Protection Act. Although population numbers are not definitely known, they are not believed to be in any immediate danger, especially since they spend most of their life in deep water far offshore.

In 2002 the 21st beaked whale species was identified through DNA analysis of teeth and tissues from five whales stranded on the coast of southern California in the 1970s. The specimens had been preserved at the Smithsonian’s National Museum of Natural History and the Natural History Museum of Los Angeles County. The species was given the name, Perrin’s beaked whale Mesoplodon perrini. A sighting of a live animal has been reported in recent years. Adult males have a single, large, triangular tusk located behind the tip of the lower jaw. It is believed that this species is limited to the north Pacific.

The multiple long, linear, parallel scars crisscrossing the body of a male Baird’s beaked may to be the result of attacks by other males using their exposed teeth in aggressive encounters, especially during breeding, and by killer whales. Various scars appear to match the teeth patterns of both. They also have cookie-cutter shark bite scars.

Baird’s beaked whales are the largest of the currently known 21 species of beaked whales. Their habitat is the deep ocean which makes them challenging whales to study in the wild. Most information about them has been obtained from dissections of animals killed in coastal hunting off Japan and studies of stranded whales. They are odontocetes (toothed whales), and their tooth structure of two pairs of two teeth each gives them one of their common names, “four-toothed whales”. Another common name for these north Pacific whales is “northern giant bottlenose whale”, because of their dolphin-like beak.