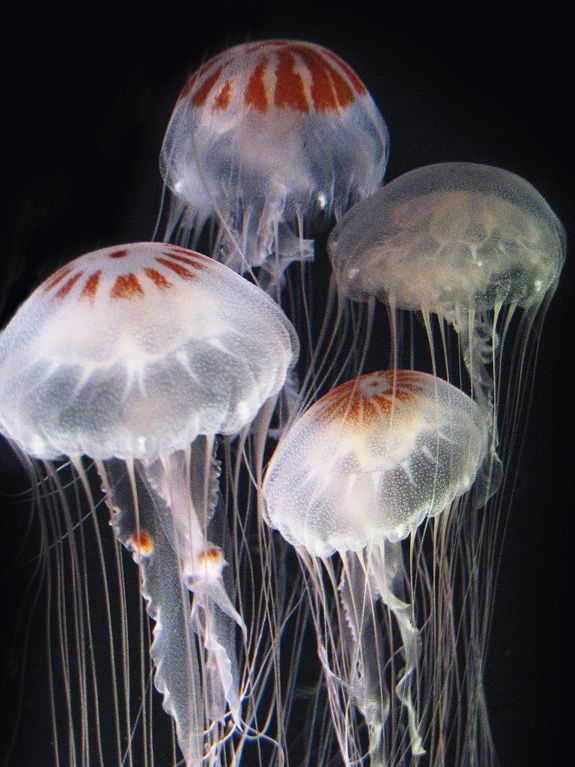 The Atlantic sea netttle's appearance is not as colorful as that of the Pacific sea nettle. | Aquarium of Pacific, Andrew Reitsma

These sea nettles are found in the high-salinity open ocean, the lower salinity of bays, and the brackish water of estuaries.

The medusa (bell) of the Atlantic sea nettle is somewhat saucer-shaped. Four thick, long, lacy oral arms hang from the bell margin, which is scalloped into shallow lobe-like structures called lappets. There are 4 to 40 long thread-like tentacles on the bell margin that alternate with marginal sense lobes (rhopalia) between lobes. Pink nettles usually have 10 tentacles and white ones have 21. The manubrium extends well below the bell margin. The four gonads are heart-shaped. Radial canals are present.

Bell coloration varies by location. Jellies in the south part of Chesapeake Bay and the open ocean are pink to reddish-maroon with radiating red stripes that may extend down the yellow tentacles. Those in the low salinity waters of estuaries have a white bell and no radial stripes. Jellies found along the southeast coast outside of Chesapeake Bay have the same color variation. Gonads can be pink, light gray, yellow, or clear.

Like other sea nettles, the Atlantic sea nettle is a voracious carnivore. Its preferred prey is ctenophores (comb jellies) in the genus Mnemiopsis. It also eats small fishes, copepods, young minnows, mosquito larvae, bay anchovy eggs, and other zooplankton.

This sea nettle becomes sexually mature when the bell diameter is about 3.81 cm (1.5 in) in diameter. An adult female produces eggs that are held in its oral arms around its mouth. The male jelly releases sperm into the water and the female uses her oral arms and tentacles to bring in sperm to fertilize her eggs. Eggs and sperm are shed daily from May to August in the Chesapeake Bay. A female that has a 10 cm (4 in) diameter bell will produce 40,000 eggs a day. The fertilized eggs remain on the oral arms until they develop into ciliated larvae, the planulae. At first they are round or oval-shaped, however, within two to three hours they change into a pear shape. Eventually they drop off the oral arms, swimming freely for a time while searching for a suitable substrate on which to attach, usually the bottom of a structure that is shaded and rough. In the bay, the underside of oyster shells is a preferred location. They attach upside-down with their tentacles pointing upward to filter feed. They are now known as sessile planocysts.

Depending upon environmental conditions, the planocysts go through one of two reproductive phases, either asexual or sexual. They either bud off non-motile clones of themselves or a phase called strobilation occurs. Strobilation only occurs when the water quality, temperature, and salinity are favorable and food supply is adequate. Miniature medusa-like structures called strobilia are formed on a stalk, one on top of the other like a stack of dinner plates with the most mature on top. The strobilia bud off as individual eyphyra that develop marginal lobes, rhopila, tentacles, elaborate oral arms, and finally, the bell shape of the adult medusa, the form in which sexual reproduction occurs. Each polyp produces up to 45 ephyrae per summer.

Trailing tentacles sting and transport food up the central tentacle to the jelly’s gastrovascular cavity where digestion takes place. Nettles can and do feed constantly because their many tentacles can function independently of each other. As they trail they offer a large surface area with which to capture prey. Large prey are partially digested on the oral arms before being transported to the gastrovascular cavity.

This sea nettle has both coronal (circular) and radial muscles. As it swims, the shape of its bell changes markedly from flat to bell-shaped during extension and contraction of the bell. The coronal muscles act first, drawing the bell inward and downward. The radial muscles then cause the bell to bend diameter. There is an initial backward thrust of the bell on the water followed by an outward jet of water with each contraction. There is sufficient drag on the bell to virtually stop the jelly in the water at the end of recovery. The jelly then accelerates again during the next beat. In the resting state at the end of the swimming stroke, the jelly’s bell is flattened and the lobes give it the appearance of an eight-pointed star.

In the open ocean they have a symbiotic relationship with blue crabs that ride on the bell and clean off debris and parasites. Juvenile spider crabs live in the bell feeding on the jelly’s mucus and tissues. Harvest fish, Peprilus alepidotus, seek shelter in the tentacles. The nudibranchs, Cratena pilata, prey on the polyps, steal the most potent nematocysts and, without digesting them, store them in their cerata for their own later use as defensive tools.

Although the toxin is mild, the sting is painful and can cause severe reactions in people sensitive to its sting.

Most jellies prefer the high salinity of the ocean, which is 35ppt (35 parts salt to 1,000 parts water) as their habitat. The Atlantic sea nettle is unusual in that it has the ability to live in low-salinity water, making brackish estuaries a suitable seasonal habitat.

The timing and intensity of spring rains and the water temperature influence the number of Atlantic sea nettles in Chesapeake Bay. In a dry spring with warm water, ephyrae bud from the polyps that have “wintered” over. When heavy rain runoff into the estuaries decreases the salinity of the water to below a salinity of 10 ppt, fewer medusae enter the bay to reproduce and fewer polyps bud.

The lifespan is about a year, however, when seasonal heavy rains reduce the water’s salinity to about 7 ppt, the planocysts remain dormant for as long as two years, extending the life expectancy from the polyp stage.

The swarms of Atlantic sea nettles that appear in Chesapeake Bay during the late spring and summer months impact recreational beachgoers and boaters. Numbers can be so large that beaches are closed. Control methods have not been successful. Netting of the beaches has not proven effective because the jellies clog the nets, keeping out desirable fauna. Broadcasting of chemicals on the bay bottom in an effort to kill the polyps has killed desirable bottom dwellers. Introducing nudibranchs, a natural predator of the nettle’s polyps, was not effective.

Some scientists attributed the increased numbers of this sea nettle in the bay, and to some extent on the southeast Atlantic coast, to urban and agricultural runoff causing a nutrient overload. This causes an explosive growth of phytoplankton such as bacteria, protozoans, and rotifers that thrive on the nutrients. Since the sea nettles prefer these foods to higher forms of zooplankton, their numbers increase.

These jellies compete for anchovies, an important food for bay fishes. It has been estimated that they consume 50 percent of the anchovy eggs and larvae during the peak July spawning period, depriving other bay inhabitants of a food source.

Atlantic sea nettles were once blamed for the decline of Chesapeake Bay oysters. It was believed that they preyed on oyster larvae during the two-week period when the plankton were free swimming. Subsequent research has shown that the nettles are actually protectors, not predators, of the oysters. When a nettle ingests the larvae, it spit it out undigested. The nettles actually prey on the comb jellies (Mnemiopsis sp.) that do catch and consume oyster larvae. Atlantic sea nettles can reduce the population of comb jellies in the bay to zero in a very short time, protecting the larvae from a major predator.

The Atlantic sea nettle is also called the East Coast sea nettle. Smaller than its close relative, the Pacific sea nettle, it too is a true jelly with sexual and asexual phases in its reproduction cycle. Size and coloration of the Atlantic sea nettles vary by location, especially among the populations found in different parts of Chesapeake Bay, where they are more abundant than in any other location. Their seasonal appearance in the bay and its tributaries causes beach closures to protect recreational beachgoers from its painful sting.