Home > News > Fun This Fall at the Aquarium

Fun This Fall at the Aquarium

This fall at the Aquarium of the Pacific, you can enjoy visiting our Horses and Dragons and Vanishing Animals exhibits and a full slate of special events, including cultural festivals and holidays.

The Aquarium’s two exhibits that debuted in summer will remain open through February 2017. Horses and Dragons features more than a dozen species of seahorses, seadragons, and their relatives in exhibits located in the Aquarium’s Tropical Pacific and Southern California/Baja galleries. Vanishing Animals, located in the changing exhibit gallery on the first floor, examines extinction and what we can do to reverse the trend.

To further explore the issues featured in Vanishing Animals, the Aquarium has produced a new film of the same name. The film was produced in house using footage from Alucia Productions and original music by Edward Freeman and Marta Victoria of Icarus Studios. The film will be shown daily in the Ocean Theater beginning September 14.

Just opened on the Aquarium’s Harbor Terrace are the popular moon jelly touch pool and a new exhibit featuring mudskippers. The new outdoor moon jelly pool features a large curved tank that can accommodate the many visitors who wish to touch these gelatinous creatures. Mudskippers are unique fish that have adapted to an amphibious lifestyle and can live both underwater and on land. Native to Indonesia, Africa, and the Indian Ocean, mudskippers get their name from their ability to hop and climb using their pectoral fins. The Harbor Terrace can be accessed through the Aquarium’s Pacific Collections gift store or by following the walkway past Lorikeet Forest.

Also on view this fall are the Aquarium’s two new penguin chicks that hatched in May and joined the rest of the penguins in the June Keyes Penguin Habitat in August. Both male, these young penguins represent the fourth generation of chicks hatched at the Aquarium.

The Aquarium’s fall calendar of cultural festivals includes Southeast Asia Day and the Autumn Festival. Families can celebrate Halloween together at Scarium of the Pacific, and you can help support the Aquarium’s animal care, conservation, and education programs at Sea Fare, our annual fundraiser. Visitors can learn more about sustainable food and drink in The Future of Food: Second Course series of talks hosted by Russ Parsons, cookbook author and former food editor at the Los Angeles Times. Visit our calendar for a full list of events. 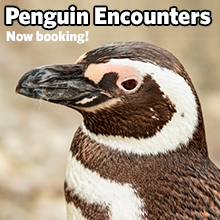