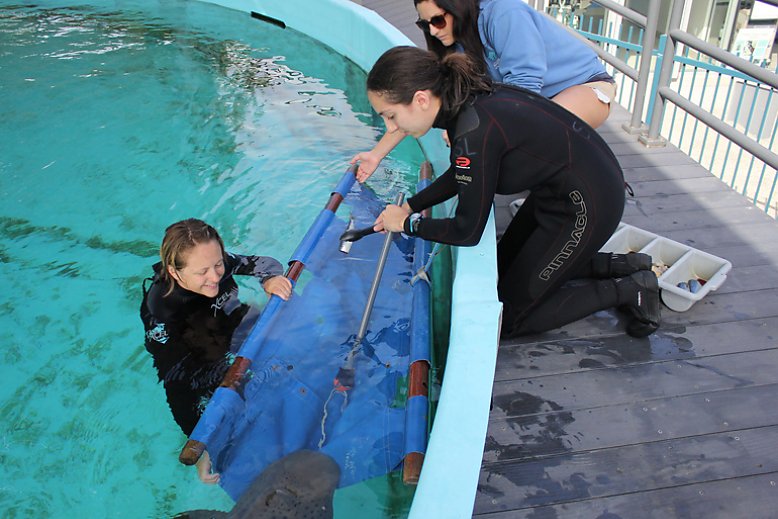 A target pole is used to lead Fern the Zebra Shark onto the transport stretcher. Hugh Ryono 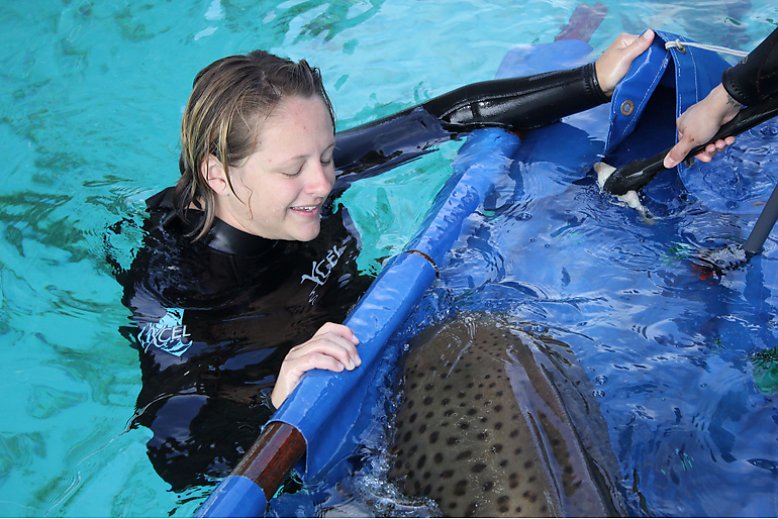 The husbandry training of Fern would not have been possible without the trusting relationship that aquarist Nicky (in the water) had built up with the shark. Hugh Ryono Fern by the stretcher. By having the shark participate in its own health care the amount of stress to the animal during a medical procedure is greatly reduced. Hugh Ryono

Training a shark to participate in its own husbandry care.

How do you get a nearly 8 foot long free swimming shark out of the water for a checkup? With a sea lion or sea otter the animal can be trained to get into a transport kennel when asked. Nicky, an Aquarium of the Pacific aquarist, decided to train Fern the Zebra Shark to willingly swim onto a transport stretcher using the same training techniques used to train marine mammals.

Fern is a Zebra Shark. The scientific name is Stegastoma fasciatum. Fern is 18 years old, weighs 137 pounds and is 7.7 feet long. Aquarium aquarist Nicky decided to target train Fern to make it easier to give this large shark its veterinary checkups. Targeting is a technique used by our marine mammal staff to train our sea lions, seals and sea otters. The animal learns that by touching a target pole that has a float or ball on the end with its nose or other parts of its body it will receive a reward of food. This is the basis of many of the behaviors that you see our mammals doing during a show such as a back flip or entering a kennel.

Nicky started teaching Fern to target on a target pole back in March of this year. While she hand fed Fern with a pair of tongs in Shark Lagoon a target pole was placed nearby to link it with the food. Soon the shark started to associate the pole with food and learned to swim towards it during a feeding session. When an object (target pole) or action is associated by an animal with a reinforcement (food) the process is known as operant conditioning.

With the association in place the next step was to introduce a transport stretcher into the water during a feeding session. Marine mammal trainers call this desensing an animal. By getting an animal used to a new object in its environment during a rewarding time such as during a feed it learns to positively relate to or at least not negatively react to the change in its surroundings.

With the stretcher in place a series of progressive approximations were then used to teach Fern to willingly place himself on it. Progressive approximation is another way of saying learning by taking baby steps. By breaking a desired behavior down to its individual components you can use a series of small easily obtainable actions to reach the desired final behavior. For instance, Fern’s stretcher behavior could be broken down to:

Each behavior approximation is progressively rewarded until the desired final behavior is achieved. This is where Fern is now. All of this training was reliant on the positive relationship that Nicky had built up with Fern over time. Just like with a sea lion or sea otter the animal has to trust the person training it. Fern trusts the aquarists.

I have to admit that although I’ve helped train some of our marine mammals to do some pretty cool behavior watching this large shark being trained to participate in its own health care was one of the neatest examples of BF Skinner’s theory of operant conditioning being put to good use that I’ve ever witnessed.

Kudos to Nicky the Aquarist and Fern the Zebra Shark!