A Forum on the Los Angeles and San Gabriel Rivers’ Watersheds

A watershed is defined as a specific land area that drains water into a river system or other body of water. The prominent cities in Southern California would not be located where they are today were it not for the Los Angeles and San Gabriel Rivers and the fertile soil around its watersheds.

For centuries these rivers were the sole source of water for its inhabitants. The rivers’ water not only helped make Los Angeles County and Orange County two of the richest agriculture regions in the nation, but also shaped its image as the “Southern California Eden”. Today however, the images of our watersheds contradict its importance to the history and development of this region. 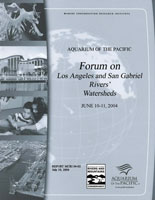