Association of Zoos and Aquariums (AZA)

The Association of Zoos and Aquariums (AZA) is an accreditation program for zoos and aquariums, recognizing those who adhere to strict standards of animal care and conservation. With the help of the AZA, accredited institutions are leaders in global and species conservation and animal care, making AZA North America’s largest wildlife conservation movement.

The Aquarium of the Pacific is not only accredited by the Association of Zoos and Aquariums, but several of our members act as accreditation inspectors or serve on AZA committees, including the Honors and Awards Committee. The Aquarium also works with the AZA in marketing, education, conservation, husbandry, and participates in their national conferences. To learn more visit: http://www.aza.org/.

The Channel Islands National Marine Sanctuary, part of NOAA’s National Marine Sanctuaries Program, is comprised of the islands of San Miguel, Santa Rosa, Santa Cruz, Santa Barbara, and Anacapa. This sanctuary is home to a diverse group of species including the blue whale, stellar sea lions, California brown pelicans and numerous fish and sharks. Many of these species can be seen hanging around the archaeological remains of shipwrecks and historic land sites within the sanctuary.

NOAA Fisheries Service (previously known as the National Marine Fisheries Service), conserves, protects, and manages living marine resources in a way that ensures their continuation as functioning components of marine ecosystems, affords economic opportunities, and enhances the quality of life for the American public.

The Aquarium of the Pacific and NOAA Fisheries Service (NMFS) have collaborated on many projects including: Whales: voices in the Sea and the NOAA Kiosk exhibits; NOAA West Day; the tagging and releasing of green sea turtles; and the Conference on Ocean Literacy (CoOL). We are also working with NMFS to reproduce endangered abalone here at the Aquarium and to create an interactive educational display that will inform the general public about the ecological, economical, and cultural significance of this valuable coastal species. Learn more about NMFS at: http://www.nmfs.noaa.gov/.

California Department of Fish and Game

The California Department of Fish and Game (CDFG) maintains native fish, wildlife, plant species, and natural communities for their intrinsic and ecological value. This includes habitat protection and maintenance to ensure the survival of all species and natural communities. The department is also responsible for the diversified use of fish and wildlife including recreational, commercial, scientific, and educational uses.

The Aquarium of the Pacific and the California Department of Fish and Game are working together to reproduce red abalone in captivity. Once this captive breeding process is perfected, we can reproduce white abalone, the first marine invertebrate to be protected under the Endangered Species Act in California. The Aquarium is also conducting surveys on wild abalone populations with the CDFG. Learn more about CDFG at: http://www.dfg.ca.gov/.

The California Coastal Conservancy, established in 1976, is a state agency that uses entrepreneurial techniques to protect, restore, and enhance coastal resources. The Aquarium shares this approach. One of the Conservancy’s current programs focuses on climate readiness, a topic the Aquarium explored in two forums in 2012. The Conservancy funded the Aquarium’s Our Watershed exhibit on the Rainbow Harbor walkway, participated in forums, and held meetings at the Aquarium. Learn more at: http://scc.ca.gov/.

The Ocean Project, Ocean Conservation through Education Action and Networking, is a global network of zoos, aquariums, museums, and conservation organizations, including the Aquarium of the Pacific that seeks to advance ocean education and action. Collectively, this network reaches more than 300 million people world wide. Learn more at: http://www.theoceanproject.org/.

ThankYouOcean.org is a state-wide organization supported by NOAA’s Office of National Marine Sanctuaries, the state of California and the Ocean Communicators Alliance. Their mission is to raise awareness of the benefits the ocean provides to us and identify ways each of us can help protect the ocean in our everyday lives.

The Aquarium of the Pacific has formed a collaborative with the Birch Aquarium at Scripps, the Cabrillo Marine Aquarium, and the Steinhart Aquarium to focus on informal science education aimed at enhancing knowledge about four ocean threats: climate change, marine debris, the decline of marine life including habitat destruction, and water pollution. Thank You Ocean will support the aquaria with production and placement of these important messages. For more information visit: http://www.thankyouocean.org/.

The World Wildlife Fund (WWF) is a multinational conservation organization operating in 100 countries to protect nature at all levels of society, both locally and globally. Through science and outreach, the WWF participates in protecting ecosystems and wildlife populations, while promoting sustainable lifestyles and efficient resource use.

The Aquarium of the Pacific is working with the WWF to protect the Gulf of California for the benefit of the animals that live there, the people that depend on it, and future generations. A particular species of interest in this project is the vaquita. The smallest of all cetaceans (whales, dolphins, and porpoises), the vaquita is critically endangered as they are often entangled in fishing nets and drown. Learn more about the vaquita and more at: http://www.worldwildlife.org/.

350.Org is group of people from around the globe—young and old, scientists and writers and activists—who all know the most important number on earth: 350. This number is most important because, according to NASA Climatologist James Hansen, once the amount of carbon in our atmosphere tops 350 parts per million, the planet upon which we’ve built civilization will cease to exist as we know it.

The Aquarium of the Pacific and 350.org will partner up in celebration of the International Day of Climate Action at the Aquarium’s Scarium of the Pacific Festival. Visitors will learn about the significance of the number 350 as it relates to carbon emissions and be encouraged to sign a pledge to do something to reduce their carbon footprint while having a ghoulish good time at the weekend festival. For more information about this critical number and to learn what you can do visit: http://www.350.org/.

In partnership with the Los Cerritos Wetlands Stewards, the Aquarium hosts monthly habitat restorations on the first Saturday of the month from 10:30 a.m. to 12:30 p.m. Restoration includes removing non-native plants, planting native plants, watering, mulching, and starting new native plants from cuttings or seeds. Learn more about this fragile urban ecosystem, what the long range plans for overall restoration, and what you can do at the Los Cerritos Wetlands Stewards website.

The Coastal America Partnership is an action-oriented, results-driven collaboration process dedicated to restoring and preserving coastal ecosystems and addressing critical environmental issues. The partnership coordinates statutory responsibilities and combines the resources and expertise of 16 federal agencies, 22 Coastal Ecosystem Learning Centers, and hundreds of corporate partners to create better management of our coastal resources.

The Aquarium of the Pacific is a member of the Coastal Ecosystem Learning Centers (CELC) and was one of 16 CELCs to conduct a regional ocean art contest for K-12 and undergraduate college students. Learn more at: http://www.coastalamerica.gov/.

Monterey Bay Aquarium
Monterey Bay’s Sea Otter Research and Conservation program (SORAC), is the collaborative research between Monterey Bay Aquarium scientists and many other groups and institutions working to understand and conserve the southern sea otter. Utilizing new technologies developed through this collaboration, SORAC will work to support the recovery of southern sea otter populations along the California coast.

Four of the Aquarium of the Pacific’s charismatic otters came from the SORAC program as non-releasables, meaning they could not be reintroduced to the wild. The Aquarium has also served as a holding facility for other non-releasable otters while they waited for a permanent home and sent members of our well-trained marine mammal staff to Sea World in San Diego so they too could be a holding facility for non-releasable SORAC otters. Learn more about SORAC and their efforts at: http://www.montereybayaquarium.org/cr/cr_sorac/sorac_research.asp.

The Aquarium of the Pacific is a founding member of CAM’s Green Museums Initiative and the first to sign the Green Museum Accord. To learn more visit: http://www.calmuseums.info/gmi/

Since its formation in 1911, the Long Beach Water Department (LBWD) has been delivering a dependable water supply meeting or surpassing all applicable water quality standards. The LBWD serves a total population of 492,000, the fifth largest city in the State of California.

The Aquarium of the Pacific has had many projects funded by the LBWD. They have funded California Aquatic Academies, the Native Gardens in the Watershed Exhibit, and will fund a second garden at the Aquarium featuring not only native plants, but drought resistant as well. The Aquarium has been a major distributer of low-flow shower heads and provides the Watershed classroom for the LBWD’s native landscaping classes. We will also be partnering with the LBWD for our Earth Day celebration in 2010. To learn more visit: http://www.lbwater.org/.

The U.S. Fish and Wildlife Service (FWS) strives to serve as conservation problem-solvers by developing and implementing collaborative species and habitat conservation strategies. They will accomplish this by working with their partners― agricultural and natural resource dependent communities, rural and urban landowners, Native American tribal governments and indigenous island communities, watershed councils, coral reef advisory groups, universities, land trusts, State and Federal agencies, and many others.

The Aquarium of the Pacific provides homes for marine organisms confiscated by the U.S. Fish and Wildlife Service (FWS). FWS inspectors are trained by the Aquarium’s Curator of Fishes and Invertebrates in coral identification so they can easily spot those species protected under CITES (Convention of International Trade of Endangered Species) for confiscation and conservation. For more information about the USFWS visit: http://www.fws.gov/.

The Reef Check Foundation is an international non-profit organization dedicated to conservation of tropical coral reefs and California rocky reefs. With headquarters in Los Angeles and volunteer teams in more than 80 countries, Reef Check works to create partnerships among community volunteers, government agencies, businesses, universities and other non-profits.

For more information about Reef Check and their conservation efforts visit: http://reefcheck.org/default.php

Seafood for the Future Partners:

For information on Seafood for the Future partners, please visit http://seafoodforthefuture.org/partners/

My Clean Water Act was formed to educate, motivate, and inspire action amongst individuals and communities to continuously improve the availability of clean and abundant water supplies. To help spread the word all over the country, MCWA is producing numerous events such as festivals, concerts, film screenings, and more. http://www.mycleanwateract.com/

1% for the Planet’s mission is to build, support, and activate an alliance of businesses financially committed to creating a healthy planet. Founded in 2002, 1% for the Planet has grown into a global movement of more than 1200 member companies in 48 countries, all donating at least 1% of annual sales to sustainability initiatives.

The Aquarium is a nonprofit partner of 1% for the Planet. Visit our profile. 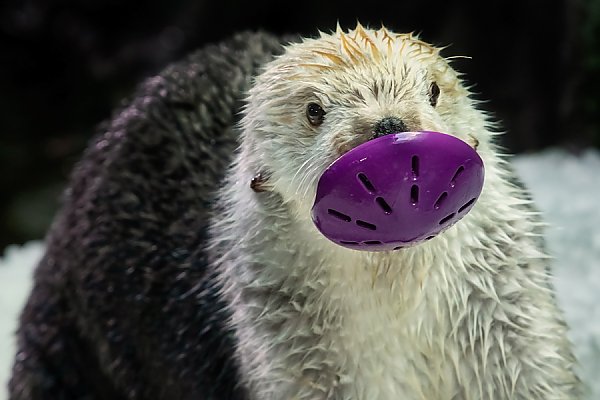 Start your own Fundraiser