Home > Seafood for the Future > The Fishery

On the U.S. West Coast commercial fishermen catch swordfish using large-mesh drift gillnets and harpoons. There is also an experimental fishery underway in California using deep-set buoy gear and deep-set linked buoy gear. Results from these experiments have been very promising, with low incidents of bycatch. NOAA Fisheries plans to issue a limited number of exempted fishing permits to fishermen for the buoy gear in order to collect more data on how it performs in terms of target and marketable species and incidental bycatch off the coast of California and Oregon.

Swordfish caught by the Hawaii-based shallow-set longline fishery is also landed on the U.S. West Coast, mostly in California. The Hawaii-based longline fishery is the largest source of U.S. West Coast swordfish, accounting for approximately 65 percent of the domestic source of North Pacific swordfish. Each gear is unique in terms of environmental and economic benefits, impacts, and limitations. A diverse portfolio of well-designed gear types and management tools will help fishermen make a living while responding to a changing environmental, regulatory, and economic landscape.

NOTE: For the purposes of this project, we will focus on gear used off the California coast by California vessels (harpoon, large-mesh drift gillnet, and buoy gear). 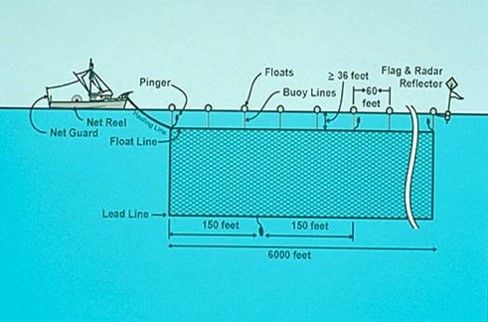 Large-mesh drift gillnets are used by commercial fishermen off California to harvest swordfish. They essentially function as mesh “curtains” that are suspended in the ocean from floats on the surface of the net designed to entangle fish by their gills. The size of the mesh and areas and depth where the nets are placed affect the types of species caught. The top of the nets hang from buoy lines, called net extenders, at least 36 feet beneath the surface, leaving room above the nets for non-targeted species to swim over them. These nets are set at night to approximately 200 feet deep with a length from 4800 feet up to the legal maximum of 6000 feet.

In addition to marketable species, the drift gillnet swordfish fishery also results in bycatch of protected species, such as sea turtles and marine mammals. For the most recent California drift gillnet fishing season (2017-2018), the retained (harvested and sold in the market) portion of the gillnet catch was 82 percent (HMSMT Report, PFMC Meeting, June 2018). 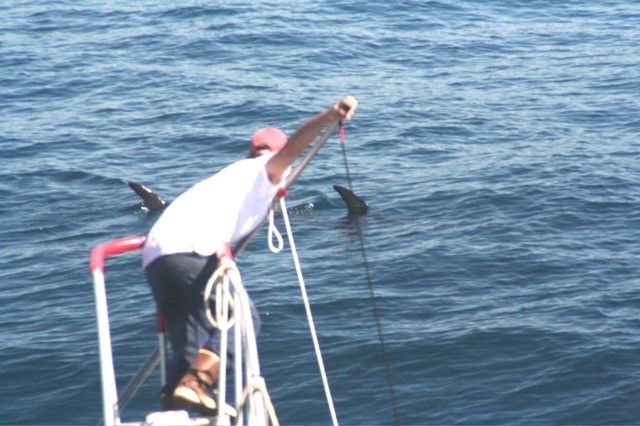 Harpoon fishing targets swordfish while they bask at the surface during the day. Harpoon gear includes a pole or stick that is propelled only by hand. The gear consists of either a pointed dart or iron attached to the end of a line several hundred feet in length. The other end is attached to a flotation device.

This is an extremely selective fishing method, but it also requires relative calm seas in order to spot the fish. Fishermen may employ spotter planes to find the fish, which may add to their expenses. There is no bycatch of special status species because fishermen select their targets. Harpoon is used as a supplement to other gear types since harpoon caught fish cannot supply the volume demanded by the market. Harpoon caught swordfish, like deep-set buoy caught fish, fetch higher average prices in the market. This may be due to a number of factors, including a higher quality product and public demand for swordfish from fisheries using gear that results in less bycatch. 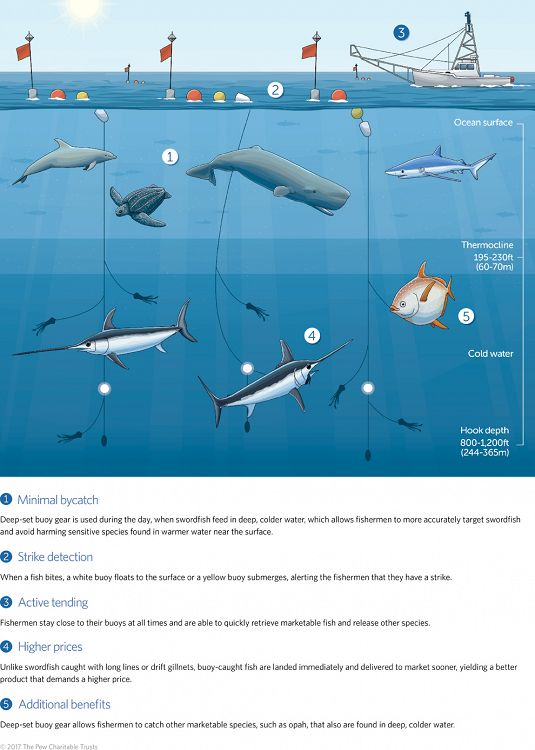 Deep-set buoy gear takes advantage of the relatively low co-occurrence between swordfish and protected species during daytime hours, which helps to reduce bycatch. Swordfish can be found deeper in the water column during the daytime, hunting for their prey such as mackerel and squid at around 300 meters (about 985 feet) deep.The gear sets baited hooks in deep water, which is very effective for targeting swordfish and other marketable species like opah or escolar, while reducing risk of bycatch for protected species such as marine mammals, sea turtles, sharks, or seabirds, which tend to spend time in warm surface waters during the day (above 100 meters, or about 330 feet). The gear is actively monitored and tended by fishermen who are alerted as soon as a fish is on the line. The catch can be brought up to the surface within minutes, and any non-target species can be released alive immediately.

This gear has been in an experimental phase for the last 6-7 years. The trials are proving to be successful in terms of reducing bycatch and providing a high-quality product that can fetch higher prices in the market. This gear is very effective at selectively targeting swordfish. In the experimental period between 2011 and 2017, 81 percent of the total catch was swordfish and 94 percent marketable species (meaning that they could be sold and consumed in the market). One hundred percent of the remaining non-marketable bycatch was released alive.

The small scale of the operation is time intensive and the volume of product is low, relative to the drift gillnets. Researchers are now working to trial linked deep-set buoy gear to increase the volume of swordfish caught by the gear in Southern California so it can be more economically viable. Based on the success of both types of buoy gear, NOAA Fisheries plans to issue a limited number of exempted fishing permits in 2018 to interested fishermen in order to further explore the feasibility of including this gear type as part of an authorized commercial fishery harvesting highly migratory species off the U.S. west coast.

Management of the U.S. West Coast swordfish fishery is complicated because swordfish migrate thousands of miles across international boundaries and are fished by many nations. Effective fishery conservation and management requires strong domestic management and cooperation among nations that harvest the stock.

The U.S. West Coast swordfish fishery (large mesh drift gillnet and harpoon) is managed by NOAA Fisheries and the Pacific Fishery Management Council under the Fishery Management Plan for U.S. West Coast Fisheries for Highly Migratory Species. Permits are required to fish for swordfish and all catch must be recorded in logbooks. California large mesh drift gillnet vessels are required to carry observers (trained fishery biologists), as requested by NOAA Fisheries, to record fishing operations, effort, catch, and bycatch. Current observer coverage is about 20 percent. Research is needed to better understand the economic and environmental implications of requiring 100 percent observer coverage in this California fishery (Supplemental NMFS Report 3, PFMC Meeting March 2018). There are also seasonal area closures and gear and operational requirements to minimize bycatch.

All fisheries targeting swordfish in the U.S. are also subject to regulations under the Marine Mammal Protection Act and the Endangered Species Act. These regulations are specifically designed to reduce impacts on marine mammals and other protected species, such as sea turtles. They require NOAA Fisheries to examine and address any adverse impacts on these species. In addition, the Magnuson-Stevens Fishery Management Act requires that the fishery minimize bycatch to the extent practical and achieve optimum yield, which is the amount of harvest that provides “the greatest overall benefit to the Nation, particularly with respect to food production and recreational opportunities and taking into account the protection of marine ecosystems.”

The Inter-American Tropical Tuna Commission (IATTC) and the Western and Central Pacific Fisheries Commission (WCPFC) manage the Pacific swordfish fishery internationally. NOAA Fisheries domestically implements the international management and conservation measures created by these entities. The International Scientific Committee for Tuna and Tuna-like Species in the North Pacific Ocean (ISC) conducts stock assessments for Pacific swordfish stocks. The U.S. is a member of the ISC.