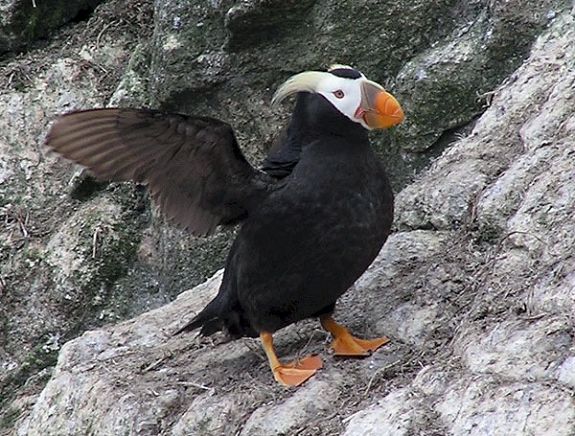 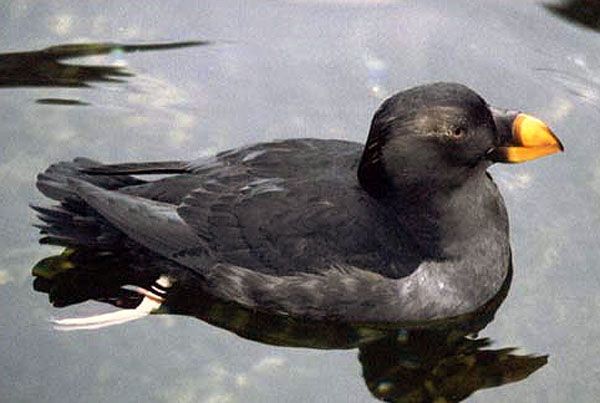 Our tufted puffins Naia, Monty, Speedy, and Val have lived at the Aquarium since 1998. They have strong personalities and definite likes and dislikes. The noise accompanying their spats sometimes reaches very high levels. They live in the Diving Birds exhibit in the Northern Pacific Gallery.

Tufted Puffins spend most of their lives in the open ocean, but during the breeding season mature birds are found on islands and coastal areas in places that have areas suitable for nesting. They prefer such places as the seaward faces of sandy bluffs above beaches, steep grassy slopes, or sometimes in crevices and cracks on cliffs. Once chicks fledge and leave the nest, they spend about two juvenile years at sea, coming ashore only after they become adults.

Tufted Puffins are medium-sized, compact birds with a large head, short, stiff wings and webbed feet on short legs. Plumage is-black above and dark gray to black below. In breeding (alternate) plumage adults have a white patch on either side of the face, and long, golden head plumes from just behind their eyes draping down the back. During the breeding season their thick, deep bills are bright red with yellow marking. Legs and feet are usually red or orange-red. In non-breeding (basic) plumage, the white face patches become gray-brown, the plumes disappear, bill plates are shed, and the bill’s red tip also disappears. Juveniles are a brownish-gray and have a shorted bill.

Foraging takes place at dawn and dusk. Tufted puffins capture and eat prey primarily underwater, in mid-water depths. In the non-breeding season they mostly prey on squid and krill although they will also eat small fishes, octopus, sea jellies, and crabs. It is estimated that 50-70 percent of their diet is invertebrates. In the breeding season they forage close inshore on squid, marine worms, krill, and small schooling fish—anchovy, sandlance, capelin, and juvenile pollock. Chicks are usually fed a variety of fish species, whatever is available close to the breeding colony. The adult carries 5-20 fish to the chick arranged crosswise in its sharp, strong, and heavy beak, a meal called a bill-load.

Socially monogamous, they form pair bonds that often last for many years. They arrive at the breeding grounds either in pairs or form pairs shortly after arrival. The breeding season is usually from April to June. Mating takes place at sea as well as at nesting sites. The most common nest is an earthen burrow that may be as long as 1.5 m (5 ft) long along, cliff edges, steep slopes covered with vegetation, and sandy bluffs. They also nest in rock crevices, and in sea cliff cracks and crevices. These puffins excavate their burrows and crevices and clean them using their feet and occasionally the bill. Nesting materials include grass, twigs, feathers, and even floating algae and plastic debris. It has been observed that one mating partner does most of the digging and cleaning while the other uses it bill to transport of the nest building materials.

Usually only a single whitish-colored egg that may have faint markings, spots, or scrawls is laid. Both partners share incubation duties for 40-53 days and then share feeding duties.

The eyes of the down covered chicks are open at birth. The chick stays in or at the edge of the nest for 42-55 days until ready to fledge. It leaves the nest at dusk or during the night, walking or flying directly to the water. The adults do not accompany the fledgling and there is no parental care after the chick has left the nest.

Tufted puffins are highly social, fishing and traveling in groups of 2-20 birds and nesting in large colonies.

They are competent fliers once they become airborne, but take-offs and landings are frequently a bit on the speculative side. When taking to the air from a cliff or crag with clear air underneath they simply fly off and with some loss in altitude, quickly gain air speed, and go on their way. Taking off from the water surface they beat their wings rapidly and using their webbed feet as paddles gain momentum and flying speed until they become airborne. Before landing at the nesting colony, they circle the intended landing site a few times and then fly directly to the nest-burrow entrance. Their aim is not always accurate and they frequently end up with crash landings into tall grass, rocks, and rocky slopes.

Puffins preen on both land and water, rubbing the side of the bill repeatedly on their oil gland and then smearing the secretion over the feathers to waterproof them. Preening is an important part of feather maintenance. Feathers must stay dry and waterproof to insure that they do not become waterlogged and heavy and remain efficient in insulating the bird’s body from extremely cold water temperatures.

Well-suited to life at sea, puffins’ feathers are waterproofed with oil to keep out the cold water in which they dive to forage and feed. When on the surface of the water they paddle with their brightly colored webbed feet, which also act as rudders while diving. Their short, stiff wings help them to “fly” underwater in search of prey. Their bones are very strong to withstand the rigors of diving. They can store oxygen in their body tissues and also use anaerobic respiration to enable them to make long dives.

Estimates of their lifespans vary from 7-25 years.

Tufted Puffins are protected in some areas of their distribution. Although populations are slowly being reduced, at this time the numbers appear to be high enough for sustainability of the species. Global climate changes on water temperature and food availability may have a negative impact in the future.

The subsistence hunting of adults and eggs by Native Americans is traditional and still permitted in most coastal areas of Alaska, especially in the Bering Strait region; however, the. influence on puffin bird populations is minimal. Some fishing methods such as use of gill nets have resulted in puffins being killed as bycatch. Pollution (especially oil spills), decreasing availability of food fish, human encroachment, and disturbance of nesting sites are all contributing to a slowly declining population.

Predation by introduced red and Arctic foxes, Norway rats, ground squirrels, and even brown bears has devastated Tufted Puffin populations on some Alaskan Islands and coastal areas. Eradication of the foxes in particular has helped renew some populations.

In 2004 the IUCN Red List evaluated this species as Lower Risk/Least Concern.

At times a tufted puffin can appear to be walking on water. This occurs when the bird erects itself on the eater, fluffs its feathers, and flaps its wing vigorously to four times in a behavior called wing-flapping. This behavior also occurs when the puffin lies to one side on the water so that one wing is under-water while the other is held in the air vertical to the water. Satisfied that one side is clean, the bird turns onto its other side and repeats the wing-flapping. This behavior is often seen in the Aquarium’s diving bird habitat in the Northern Pacific Gallery.

Tufted Puffins are migratory seabirds of open ocean waters in the winter and coastal islands and rocky cliffs in the summer breeding season. They are the largest and most distinctive in appearance of the three puffin species, and the one that migrates the furthest south in eastern Pacific waters to as far as California’s Channel Islands. They have several other common names—old man of the sea, sea parrot, and the name given to them by the Aleuts, toporkie.