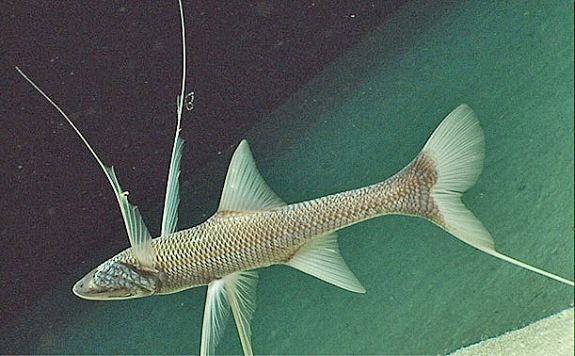 A swimming tripod fish, an unusual sight since these fish rarely leave the seafloor | Courtesy of NOAA

Worldwide distribution in temperate and tropical oceans from the 40° northern latitude to the 40° southern latitude.

This relatively small fish has modified pelvic and caudal fins that are elongated at the tips, called rays or elements. These extremely long rays stick out of the pelvic fins as well as the lower caudal, or tail, fin. These rays are rigid while the fish perches over the substrate, but appear to be flexible when the fish swims away. Its pectoral fins, known as tactile organs, extend upward to detect prey much like antennae. The eyes have been significantly reduced and almost disappeared since it lives in the deep ocean where it is dark. Their color ranges from bronze to pale with gray on the head, belly, and along the lower back.

Tripod fish spends most of their life perched on its fins on the ocean floor waiting for a meal to come by. It depends on its long and feathery pectoral fins to alert it when it senses food. Acting as hands, these long pectoral fins will then capture the food and direct it towards its mouth, which has a large gape. They will eat small planktonic crustaceans, zooplankton, and any tiny organism that drifts through the current. To increase its chances of obtaining food, the tripod fish faces into the direction of water movement, staying still, and waiting for food to arrive.

Tripod fish are simultaneously or synchronously hermaphroditic, possessing both male and female reproductive organs that mature at the same time. If this fish cannot find a mate due to its predominantly solitary existence in a harsh environment, it can fertilize its own eggs, thus ensuring the survival of the species. When self-fertilization occurs, the tripod fish spawns both sperm and eggs into the water column. When two tripod fish mate, one broadcasts sperm and the other eggs into the water column.

Tripod fish are mainly a solitary benthic species, living alone close to the ocean floor throughout their adult life. While hunting, it will face the current, standing on the substrate and perching about 3 ft above the seafloor with its elongated fins. This is important because currents are very slow or virtually non-existent on the ocean floor or just centimeters above it. This is why they need to be above the substrate, high enough where there is more current. Their elongated rays will stiffen while in hunting mode, and become flexible when it swims. In the event that a mate cannot be found, tripod fish will fertilize their

The elongated pelvic and caudal fin rays found on the tripod fish are an adaptation that has allowed these fish to hunt effectively so close to the deep ocean floor. These rays become soft and limp as the fish swims away, trailing behind it like flaccid tails. Scientists are not sure how this mechanism works, but they suspect fluid is pumped through the extremely long rays, making them rigid and allowing tripod fish to balance while standing over the substrate during hunting. As a result of living in virtually complete darkness, these “eyeless” fish have developed long pectoral fins that extend upward like antennae, and serve as tactile organs, or hands, when it searches for food. Since this type of hunting requires very little energy, it is an essential adaptation for a predator that lives under the extreme pressure, near to freezing water temperatures, and in the darkness of the deep ocean.

Although relatively more is now known about tripod fish as a result of new technology for deep-sea exploration, scientists continue to learn more about this species from photographs and submersible observations. Tripod fish do not have any importance commercially, and do not appear to be threatened or endangered. However, the IUCN (International Union For Conservation of Nature) Red List has not yet assessed its conservation status.

The tripod fish’s scientific name, Bathypterois grallator, is derived from Greek and Latin. The Greek work “bathy” means ‘deep’ for its deep ocean habitat, and “pterois” meaning ‘feathery’ for its long feathery fins. From Latin, “grallator” means ‘one who walks on stilts’, which relates to the tripod configuration this species exhibits when hunting.

From the cold, dark depths of the ocean comes a peculiar yet interesting looking fish called the tripod fish. Known as a “stilt walker,” this unusual fish perches over the substrate in the deep ocean floor most of its life hunting for food. Using three elongated projections from its modified fins, it stands over the seafloor like a tripod, giving it its common name, tripod fish.