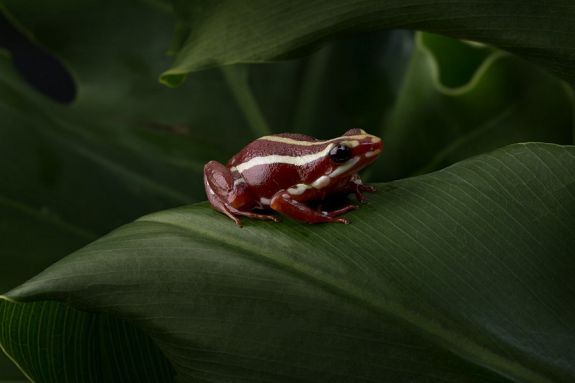 Our Tricolor Poison Dart Frogs are a mixture of individuals bred by our aquarists behind the scenes and some obtained from another Association of Zoo and Aquariums captive breeding programs.

Primarily terrestrial, but requiring habitat near streams for breeding, the Tricolor Poison Dart Frog usually lives in primary (undisturbed natural) and secondary (deforested) tropical rainforests and grasslands on slopes of the Andes Mountains. It is also found in areas where there is human activity, such as banana and cacao plantations and pastures near streams of running water.
Elevation: 164 to 3,624 feet (50 to 800 meters) above sea level

The Tricolor Poison Dart Frog is a small frog. It has a smooth skin and a pointed snout with variable colors and patterns. There are three longitudinal stripes on the frog’s back that are often broken into short bars. Stripe size and color, and also the background color that may be shades of red, yellowish-white, or green, and black or shades of brown, vary by habitat elevation.

Frogs that are found in primary (undisturbed) and secondary (disturbed) cloud forests at high elevations have a chocolate brown background color with relatively thin green stripes. The Tricolor Poison Dart Frogs that inhabit grasslands, bushes, and shrubs at elevations of about 2,310 feet (700 meters) have background colors varying from orange-red to reddish-brown. The middle stripe, the widest of the three stripes on the frog’s back, is a creamy yellow-white. The ventral side is reddish-brown to brown with light blue spots and markings. The morph that inhabits very moist secondary (disturbed) growth at low elevations is a deep, bright red with narrow stripes that are usually mint-green, but can range to whitish-blue.

Mating takes place from about mid-July to mid-September during the tropical rainy season. A male advertises for a female with melodious calls demonstrating how fit he is. Once a female has chosen a male, most poison dart frogs climb onto the female’s back and grasp her near her front or back legs to mate. The Tricolor, however, grasps the female around her head with his front legs. The female lays a clutch of fifteen to forty eggs (usually about twenty) that the male fertilizes as they are laid or by walking over them after they are laid. The male is the primary caregiver for the incubating eggs, protecting them from predators and keeping them moist by turning them.

After a tadpole hatches, it wiggles onto the male’s back and he carries it to a pool or stream where it swims off. The male then returns to the clutch for the next tadpole.

The tadpoles now begin to metamorphose into froglets. Their gills are grown over by skin, eventually disappearing to be replaced by lungs. Teeth and rear legs develop. The head becomes more pronounced and the body elongates. Front legs develop and the tail becomes a stub. At ten to twelve weeks old, with metamorphosis complete, a young frog or froglet leaves the water for a land habitat.

Tricolor Poison Dart Frogs are relatively secretive. Unlike most other poison dart frog species, they immediately stop their melodious calling when approached.

Males are very aggressive, defending their territory vocally and if necessary, grappling with another male. The combative males both assume an erect stance, with front legs facing outward, they clutch one another while standing up straight. They then circle each other until one can force the other to the ground by lying on him.

This species has adapted, and in some locations even thrives, in cleared areas around plantations, grassy environs around small steams, and in meadows kept wet by irrigation runoff.

Stripe size and coloration and the background color of Tricolor Poison Dart Frogs varies by habitat elevation. Whether this variation is an adaptation to blend into or stand out from the surrounding environment is not known.

Unknown in the wild. Six to seven years In protected environments such as zoos and aquariums.

The Tricolor Poison Dart Frog is known in only seven small locations in Ecuador. Populations are limited and numbers are declining in the northern portion of its range, where some distinct population segments have even disappeared. The reason may be due to its limited estimated range of less than 1,900 square miles (5,000 square kilometers).

Based on field studies done in 2004, the International Union for Conservation of Nature (IUCN) Red List of Threatened Species lists the Tricolor Poison Dart Frog as Endangered and states that its information needs updating. The IUCN works on conservation and stability of wildlife globally. The Red List provides information and analyses on the status, trends, and threats to species in order to inform and catalyze action for biodiversity conservation.

This species is listed as CITES Appendix II. CITES, the Convention on International Trade in Endangered Species of Wild Fauna and Flora, is an international agreement among governments whose aim is to ensure that international trade in selected species of wild animals and plants does not threaten their survival. The United States is a CITES Party.

Climate change: Many scientists believe that impacts of global climate change could lead to increased temperatures and changing rain patterns in the Amazon basin. As a result, the region’s forests, water availability, and ultimately the animals and plants that currently inhabit the rainforests would be affected. Research done by Brazil’s National Space Research Institute shows that a warmer and drier environment for the region could convert 30 to 60 percent of the Amazon rainforest into a type of dry savanna, a habitat for a very different biodiversity than found in today’s Amazon basin rainforests. The Tricolor Poison Dart Frog may be able to adapt to changing environmental conditions as evidenced by its ability to survive in areas where there is human activity, such as banana plantations, and degraded secondary rainforests.

Attempts have been made to produce a potent non-addictive pain killer called epibatidine from the poison of this species. Decades following its discovery and analysis of the chemical structure, the toxin has been synthesized in the laboratory. The National Institutes of Health has licensed the synthetic toxin, but it still has to be developed into a pharmaceutical that survives clinical trials regarding its effectiveness and safety. One such clinical trial had to be stopped because of side effects caused by the drug.

Captive bred Tricolor Poison Dart Frogs often have a different coloration than wild frogs. They tend to be brownish-colored with narrow stripes, regardless of the color if the parents.

The most remarkable feature of the Tricolor Poison Dart Frog is that its bones are green. An endangered species, its common name comes from the combination of colors that varies by where the frog is found. In addition to coloration, patterns and size of the frog also vary by location. Some frogs have bright red and whitish colored stripes, causing them to be called Candy Cane Frogs. Their toxin is now being produced synthetically in pharmaceutical laboratories, where it is being evaluated as a non-addictive substitute for morphine.