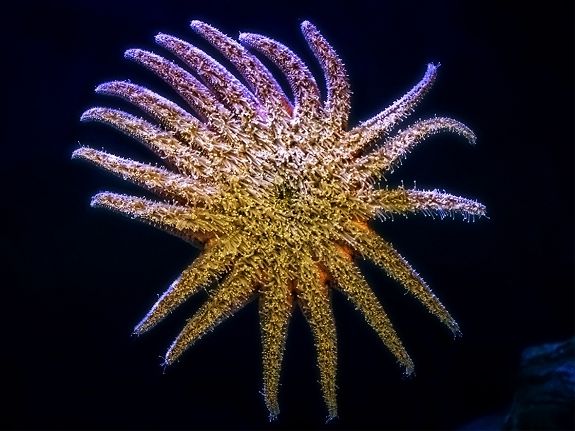 Sunflower sea stars can be found in the giant Pacific octopus exhibit and Japanese spider crab exhibit in the Northern Pacific Gallery.

This species is found from Unalaska Island, Alaska, to Baja California. It is less common south of Monterey Bay, California.

Sunflower sea stars are commonly found in the intertidal zone up to 394 feet (120 meters) deep, but may be found as deep as 1,427 feet (435 meters) on sand, gravel, mud boulders, and rocky substrates.

This species is a large radially symmetrical sea star with fifteen to twenty-four arms. It is the heaviest and fastest known sea star, weighing up to 13.4 pounds (5 kg) and moving up to 9.8 feet (3 meters) per minute on its 15,000 tube feet. Colors range from orange to pinkish to yellow, brown, and purplish with white spines. Its fleshy, limp body relies on fluid pressure to maintain its form. The sunflower star’s unique skeleton is made up of disjointed pieces, while most sea stars have a rigid, one-piece skeleton. Their stomach is found on their underside in the center of their body, or the oral surface. This allows the animal enlarge its body and open its mouth wide to take in food. Tube feet are used for locomotion or clinging to a substrate.

Primarily carnivorous, P. helianthoides feeds on sea urchins, fish, mussels, crustaceans (barnacles and crabs), clams, sea cucumbers, gastropods, sand dollars, and occasionally sponges and algae. Sea urchins make up 21 to 98 percent of most sunflower sea star diets. To find prey, they use their strong sense of smell and very sensitive indicators of light and dark. While moving at a quick rate of speed, they put their leading eight arms out front to grab onto the prey. It then protrudes its entire stomach covering and digests the prey. Some prey species have developed an escape strategy in response to sea stars. For instance, abalone will accelerate and whip their shell back and forth to break the sea star’s tube feet grasp.

P. helianthoides are broadcast spawners. The mating period is between March and July, peaking in May and June. Each sex releases its gametes into the water with fertilization taking place by chance. The fertilized eggs develop into bilateral, swimming larvae, living as plankton for no more than ten weeks. This planktonic form feeds on zooplankton. After settling onto the bottom, the larvae metamorphoses into a juvenile sea star with five arms. As the juvenile matures, it will grow more arms.

This sea star tends to be solitary. It moves primarily by using its tube feet. They move up and down the shore with the tide.

Sunflower sea stars can regenerate their arms, which it may detach when attacked by a predator or handled excessively. They may form an entire new sea star if the detached arm has a portion of the central disk still attached.

This species can live three to five years.

Sunflower sea stars are not evaluated by the International Union for Conservation of Nature, but like all marine life are threatened by pollution.

The sunflower sea star is the largest of the sea stars and has the most arms. It may also be the fastest sea star. It is typically found in the eastern Pacific Ocean from Unalaska Island, Alaska, to Baja California, but less typically south of Monterey Bay. This soft-bodied sea star relies on fluid pressure to maintain its body form. It has fifteen to twenty-four arms and may weigh up to 13.4 pounds (5 kg). Colors vary from orange to pinkish to yellow, brown, and purplish with white spines. Pycnopdoia helianthoides has over 15,000 tube feet, having suction cups that allow the sea star to either cling to rocks or move along a substrate.