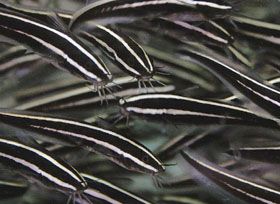 These fish show off their schooling ability in an exhibit in our Tropical Pacific gallery.

Stinging catfish are the only catfish to inhabit coral reefs. While they thrive in water that is as deep as 35 meters (115 feet) water, they also live in shallow estuaries and tide pools. Sandy ocean floors provide the fish with ideal hunting grounds and breeding areas. Adults often hide under rock or coral ledges. They have occasionally been observed in brackish and fresh water.

Adult stinging catfish have a different coloration than juveniles. Young catfish have dark grey, black, or brown bodies. There are two ivory, yellow, or white horizontal stripes on each side of the body. The belly is a pale cream or white color. As they age, the stripes fade and the body lightens to liver, tan, or chocolate. The pale underside also acquires a brownish tinge.

Primarily carnivores, these fish stir up the sandy bottom of the ocean floor with their barbels to uncover hidden prey that they have smelled with taste buds on their mouth and barbels. Crustaceans, mollusks, and worms provide the bulk of their diet, but adults may eat small fish given the opportunity.

Sexes are separate. When ready to breed, male stinging catfish construct a shallow nest in rocky areas with sand. The female releases her eggs into the water and the male fertilizes them externally. It has been reported that the male guards the tiny eggs and young, but this has not been confirmed. The young fish, or fry, hatch as planktonic larvae.

Juvenile stinging catfish display an unusual schooling behavior that is more often observed in temperate and cold water fish species. Instead of simply gathering into a group, the fish form a sphere-shaped school of six to over one hundred individuals. They travel near the ocean floor in a curious revolving motion, with the upper fish exchanging places with lower fish. By using such an unusual schooling manner, all the catfish take turns keeping watch for predators while gaining the opportunity to forage. Once the fish age, however, they abandon their schools and become solitary or form groups of up to only 20 individuals.

Stinging catfish defend themselves from predators with the sharp venomous spines on the beginning of their dorsal and pectoral fins. If agitated, the fish use these spines to inject potent venom. The venom usually causes extreme pain and has been reported to have caused the death of individuals allergic to the venom.

Stinging catfish are not on the IUCN Red List. Because coral reefs are one of their habitats, declines in coral reefs due to global climate changes, El Niños and other weather impacts, and impacts of human activities could require that they rely on other habitats for their survival.

Stinging catfish are occasionally found in fresh water streams in Madagascar and East Africa. Some scientists believe that they may travel into fresh water to breed as salmon do.

The stinging catfish is the only one of the 75 species of catfish that is found among coral reefs. Catfish are named for the barbels on the mouth that give the image of cat-like whiskers. The stinging catfish’s genus name Plotusus is derived from the Greek work, plotus, which means swimming, and its species name from the Latin word, linea, referring to the stripe or line. Their venom