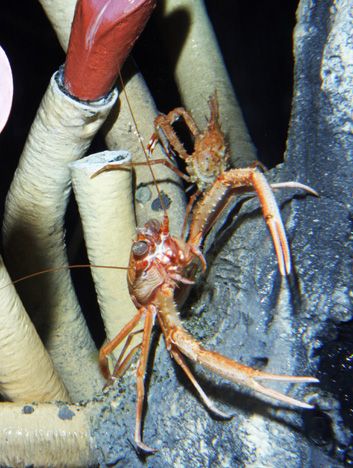 This photo was taken at the Aquarium's Hydrothermal Vent Exhibit. It shows the squat lobster crawling over the model of giant tube worms. | Perry Hampton, Aquarium of Pacific

Although they may be found near the surface, most squat lobsters live on the sea floor. They are found in sea mounts, canyons, and next to deep sea hydrothermal vents. Most species swarm together in large numbers. M. hrispina lives in depths of 12 to 1463 m (39.4 to 4800 ft.), generally in rock faces and cobble. M. quadraspina also lives in deep water. Juvenile squat lobsters may swarm in the water column, especially where there is a bloom of plankton for them to eat. C. princeps are found at depths of 76 to 145 m (250 to 40o ft)

Squat lobsters resemble lobsters in shape, but they are flatter and usually smaller. They have ten legs, and the first pair is usually much longer than their body and has a set of large claws. The next three pairs of legs are used for walking, while the much smaller fifth pair has very small claws. These claws are thought to be used to clean their gills. Munida quadrispina is bright red in color while M. hispida is reddish, but less colorful.

Because there are so many species so widely distributed, their eating habits are very different. Some are filter feeders, straining out plankton from seawater while others eat dead material or particles of algae that fall to the ocean floor as marine snow. Others such as M. quadrispina are believed to eat dead animals, plants, and zooplankton.

Not much is known about the reproduction of most squat lobster species, including M. quadrispina and M. hispida. However, some squat lobster species have been studied in some detail, particularly in South America where attempts have been made to fish them commercially. M. subugosa, a species that is found in Argentinian waters, has a reproductive cycle that starts in May with egg development in females and ends in September with larvae hatching, just in time to catch autumn zooplankton blooms. The larval stage lasts for only a few days.

Not much known about most species, although it is believed that most live in rocky crevices where they can protect themselves with their long front legs and claws and possibly ambush unwary passing animals.

About 16 species of squat lobster have been found living near hydrothermal vents, adapted to living in one of the harshest environment in the ocean. They are believed to feed on the mats of chemosynthetic bacteria found at the vents.

Life span is unknown for most species of squat lobsters. Whether hydrothermal vent crabs move to a new vent when the one at which they live collapses is yet to be discovered.

M. intermedia, a squat lobster that lives in the Adriatic Sea, has an estimated live span of about four years, but M. subugosa from Argentina is thought to live seven to eight years.

Because of their small size, squat lobster have generally not been widely fished, even though they are often abundant where found. However, they have been used as cocktail “shrimp”, as feed stock for a key protein that contributes color to chicken eggs and farmed salmon, and in cheese processing. Some commercial fisheries have been developed. Over-harvesting for these reasons could impact squat lobster populations. While there are no worldwide conservation management plans, Chile has imposed quotas for commercial fishing for squat lobsters in its Exclusive Economic Zone (EEZ).

One squat lobster species, M. andamanica, eats only wood from sources such as sunken trees called wood falls or the timbers from shipwrecks.

Also called Galatheid crabs, squat lobsters are not lobsters; they are crabs and are most closely related to porcelain and hermit crabs. Widely distributed worldwide, there are 60 genera and over 900 species. Scientists estimate that as many as 120 species may not yet have been discovered. Two species are found in California waters. Munida quadraspina is found in Pacific Ocean waters from Sitka, Alaska to the Coronado’s in Baja California. Munida hispida ranges from Monterey Bay, California south to the Galapagos Islands.