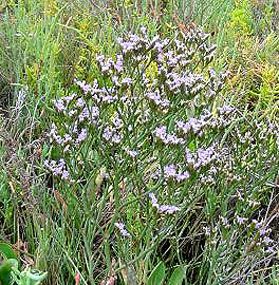 Our plants which are in the Shorebird Sanctuary were donated by the Stewards of the Los Cerritos Wetlands located in Long Beach, California.

This species is commonly found in salty soils of the high saltmarsh.

Sea lavender is a herbaceous perennial with a woody base. Tm many leaves are arranged in a spiral at the base of the plant. The flowers that bloom until December are small, papery, have one to three petals, and are pale violet or blue-white in color. There are no leaves on the flower’s tall branching stems.

Sea lavender flowers are hermaphroditic, male and female reproductive organs are on the same flower. Flowering occurs from July-December. Pollen is carried by flies, bees, and the wind, there is some self-fertilization also. The fruit is a small brownish-green capsule that contains one seed.

Sea lavender is a late summer source of nectar for some insects. Butterflies are attracted to the plants because they have a surface that the insects can perch on or cling to while feeding, have a good supply of nectar, and the nectar is easy for the butterflies to get to. Spiders build webs on the stems from which they capture prey.

Sea lavender is a salt excreter. Special pores in the plants pump out salt water through the leaves. The sun evaporates the water and the salt crystals left behind become visible on the grass blades.

Like all plants that use estuarine ecosystems for habitats, Salty Susan is affected by the replacement of wetlands by residential, commercial, and industrial development and by urban runoff that pollutes these areas.

The Ohlone, a California Native American nation, prepared a tea that was used to purify, cleanse, and thin the blood and to treat urinary tract infections and venereal diseases.

Sea lavender is known to home gardeners as statice, an everlasting flower because of the calyx. The calyx is the structure that covers the flower bud and remains at the base of the flower has faded and died. An example—the green structures on a strawberry. The showiest species, a species that is air-dried for flower arrangements, originated in the Canary Islands in the Mediterranean.