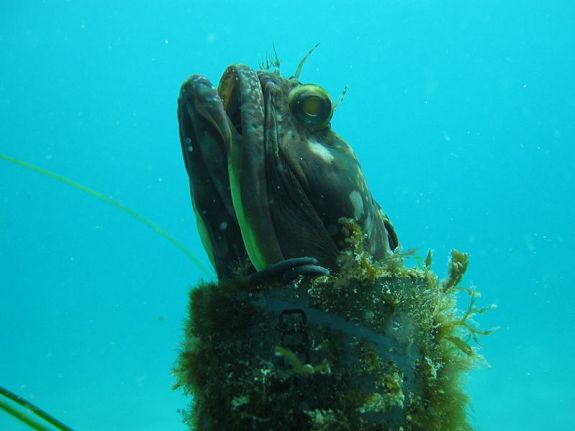 Our sarcastic fringeheads share a habitat with sand dollars and brittle stars in the Redondo Canyon exhibit in the Southern California/Baja Gallery.

These fish are found along open coastlines on sand or hard mud bottoms, outside the breaker zone in depths of 3-73 m (10-240 ft). They live in various kinds of shelters, such as empty clam or snail shells, abandoned burrows, and cracks in clay or rock outcroppings. They also find human trash such as cans and bottles satisfactory as a home worth protecting. Whatever the shelter used, a sarcastic fringehead claims it as its home territory, fiercely defending it against intruders. The larger the container, the larger the fringehead occupying it.

The body of sarcastic fringeheads is elongate, slender, and moderately compressed. Their long dorsal fin extends from the rear of the head almost to the rounded caudal fin. Heads are very large, with bluntly rounded snouts and prominent lips. The huge jaw extends back well past the eye and is larger in males than females. These fish have numerous needle-like teeth and wavy, fringe-like appendages called cirri over their eyes.

The color of sarcastic fringeheads is usually brown to gray, often with a red tinge and green or pale blotches. Males can be almost black with the rear of their giant jaw a bright yellow. Usually there are pale spots or patches on the cheeks. The ocelli (eye-like spots) on the spinous dorsal fin of males are metallic blue, surrounded by a golden ring.

Fringeheads are ambush predators, jumping out from their shelter to surprise prey swimming or moving by, What they eat in the wild is not known. Closely related fish such as pike-blennies, tubeblennies, and flagblennies are known to feed primarily on crustaceans. A sarcastic fringehead’s needle-sharp teeth probably help it to ensnare slippery, moving prey.

Spawning usually occurs from January to August. A female deposits about 3,000 eggs in clam burrows or under rocks. The eggs, which are guarded by the male, are 0.9-1.5 mm (0.035-0.06 in) in diameter. Each egg has filaments that are used to attach the egg both to the nest itself and also to other eggs. On hatching larvae are about 3.0 mm (0.12 in) long.

Instead of entering a hole or burrow head-first; fringeheads frequently back into it, eliminating the need to turn around.

Pugnacious and aggressive, these fish lie in wait in their shelters ready to attack prey or intruders. With only a bizarre-appearing head protruding from the shelter, an enormous mouth, and needle-like teeth, they are ready to aggressively defend their territory against all intruders. They are known to attack almost anything (including divers)that appears anywhere within their range of vision. They show who’s boss with an intimidating, animated threat display complete with body and head flexing, spreading gill covers, and snapping jaws. If the threat does not solve the problem, it is usually followed by a vicious, gaping-mouth attack on the intruder and a hot pursuit.

These fish are believed to live about 6 years.

Although a fish of this size would be expected to be subject to larger predators, its ability to protect itself probably minimizes this danger.

It is unlikely that anyone intentionally fishes for this tiny, pugnacious fish. Sometimes accidentally caught, sport and commercial fishers are usually not comfortable handling the fish because there is a good chance of being bitten by the needle-sharp teeth of an angry fringehead unwilling to let go. Divers have reported damage to their wet suits by these grumpy little fish.

This species is not included on the IUCN Red List.

The ocean bottom in Redondo Canyon in southern California is littered with discarded bottles, jars, cans, and similar containers. Divers have observed that many of these littering items house a sarcastic fringehead.

Although usually less than 10 inches long, sarcastic fringeheads are fearless and extremely aggressive, charging anything that approaches their burrows. The sarcastic part of their common name is attributed to their temperament and the fringehead to the distinctive appendages over their eyes.