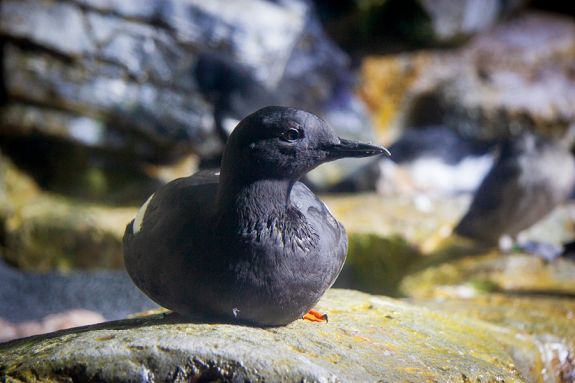 | Andrew Reitsma/Aquarium of the Pacific

The Diving Birds Exhibit is home to our pigeon guillemots. They share the exhibit with their puffin and auklet cousins. The exhibit recreates their northern Pacific rocky coastline home.

These birds are found in the Northern Pacific Ocean, from Kuril Islands, Kamchatka Peninsula, north and east to Alaska, and south to Southern California.

Pigeon guillemots live on rocky coastlines and in coastal waters.

This plump bodied bird has a fairly long, slender neck, rounded wings, and a straight bill. Adult breeding plumage is solid black with white wing patches. Non-breeding adults and juveniles are mottled gray and white with white bellies. In both plumages, they have bright red feet, mouth lining, and legs. They have sharp claws on their feet. Their wings tend to be rather small, so they must beat them rapidly to stay aloft or navigate underwater. They use their feet as rudders underwater and claws to help scale rock faces.

These birds feed on small fish, crustaceans, mollusks, and marine worms. They tend to feed closer to shore than other alcids. When feeding, they dive to the bottom using their wings and move slowly over the bottom seeking prey. Most dives tend to be within 60 feet (18.3 meters) of the surface, but they may dive as deep as 150 feet (45.7 meters).

Breeding season begins mid-May in their southern range and mid-June in their northern range. They reach sexual maturity at three to four years of age. They tend to be monogamous. When the pairs come together, they perform a courtship dance, diving, calling, bill touching, and chasing each other. Pigeon guillemots use vocal calls and behaviors to affect pair bonding and establish hierarchies. The nest site may be in a rock crevice, cavity, cave, or an abandoned burrow or they may excavate their own burrow. The same site may be used for several years. They tend to lay one or two pale blue-green eggs with gray and brown patches mainly on the larger end. The egg shape is larger on one end, giving it a slightly conical shape, which helps keep the egg from rolling out of the nest. Both parents incubate the eggs for twenty-six to thirty-two days. Both parents feed the chicks. Twenty-nine to fifty-four days after hatching, the young will leave the nest, usually at night. They are able to swim and dive immediately, but aren’t capable of strong flight for another two to three weeks.

Pigeon guillemots may rest in “rafts” offshore at night when not in breeding season.

They tend to stay in isolated pairs or small colonies.

These birds are known to live about fifteen years.

IUCN lists this species as Least Concern. The population is thought to be declining due to pollution, oil spills, and climate change.

A member of the family Alcidae along with puffins, auks, murres, and murrelets, these medium-sized seabirds are found along rocky coasts from the Kuril Islands of eastern Russia, north and east to Alaska, and south to California. The pigeon guillemot is a plump-bodied bird with rounded wings, a straight bill, and a fairly long, slender neck. Adults in breeding plumage are a very eye-catching solid black with white wing patches. Non-breeding adults and juveniles are mottled gray and white with white bellies. In both plumages, they have bright red feet, mouth lining, and legs. They use their wings to help them “fly” under the water to find food.