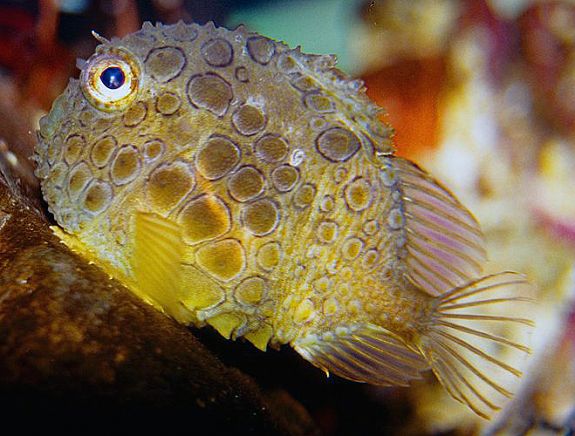 One of the many colors of Pacific lumpsuckers. | Courtesy of NOAA NMFS

Pacific spiny lumpsuckers can be seen in the Northern Pacific Jewels exhibits. They are fed a mixture of finely chopped squid, shrimp, clams and fish, as well as small krill and live mysid shrimp.

Ocean waters off the Washington coast (especially Puget Sound), up around the arc of the Aleutian Islands, to the Asian mainland and the northern islands of Japan, and in the Bering Sea.

Pacific spiny lumpfish live in a wide range of habitats where they are usually attached to solid objects with their suction cups. Habitats include eelgrass beds, rocky areas with kelp, and other algae growth. They are also found in shallow bays and around docks. They are frequently found in eelgrass beds at night. Water depths are from shoreline to as deep as 146 meters (480 feet).

Pacific spiny lumpfish have an almost spherical or global head and body shape. They do not have scales. Instead the body is covered with plate-like structures containing spiny lumps called tubercles. Females have more tubercles than males. They have a squared dorsal fin, a caudal fin that is rounded, thin, and transparent pectoral fins and a specialized fringed sucker disk on their stomachs that has evolved is a modification of their pelvic fins.

They have a wide mouth with flat large lips and large protruding eyes. They have a wide range of colors: shades of brown to green, often with yellow or orange highlights.

In the wild they feed on slow moving crustaceans, polychaete worms, and mollusks that are found in the sandy or muddy bottoms.

Pacific spiny lumpfish spawn in shallow warmer water from about July to October. The females lay large, spherical, orange colored eggs in sheltered deep depressions in rocks. The female pressures the eggs into the nest and the male then fertilizes them. The male is the caregiver of the eggs until they hatch. He attaches himself to the rocky surface surrounding the eggs where he aerates the eggs by waving water over them with his fins to supply them with oxygen. He also protects them from predators such as crabs, sea stars and small fishes.

These lumpsuckers are solitary by nature and are usually found alone. Inefficient swimmers because of their spherical body and small fins, when disturbed, spiny lumpsuckers aimlessly change directions. They use rocks and seaweeds for hiding places.

They rely on their excellent camouflage to avoid detection by predators. The adhesive disk that has evolved from modification of their pelvic fin helps them to overcome the lack of a gas bladder and their inefficient swimming movements.

They have not yet been evaluated by the International Union for Conservation of Nature (IUCN). These fish that rely on eelgrass for habitat and breed in shallow water may be vulnerable to sea level rise and increases in water temperature, resulting from climate changes in the Pacific Northwest. These changes are already being seen in the Bering Sea where a population of Pacific spiny lumpsuckers exists.

In Norway, Iceland, and the north Atlantic there are commercial fisheries that either target the lumpfish species Cyclopterus lumpus, or catch it as bycatch in trawling for other fish. Lumpfish are harvested during the spawning season to collect roe or eggs from the females that is sold as lumpfish caviar. To date, no use has been found for the carcasses which are discarded. There is some evidence that the populations are declining, especially in Norway.

Pacific spiny lumpsuckers are a favorite of SCUBA divers. In addition to their entertaining movements and behaviors, they often will eat out of a diver’s hand.

Divers describe Pacific spiny lumpfish as bizarre, cute, comical, entertaining, and as a ping pong ball with fins. All are appropriate descriptions of these tiny almost spherical fish whose pelvic fin is a modified suction disk with which a spiny lumpsucker attaches itself to rocks or other substrate such as kelp.

Their family name, Cyclopteridae, is derived from the Greek words “kyklos” which means circle, and “pteryx” which means wing or fin, in reference to the circle-shaped pectoral fins most of the fish in this family have.