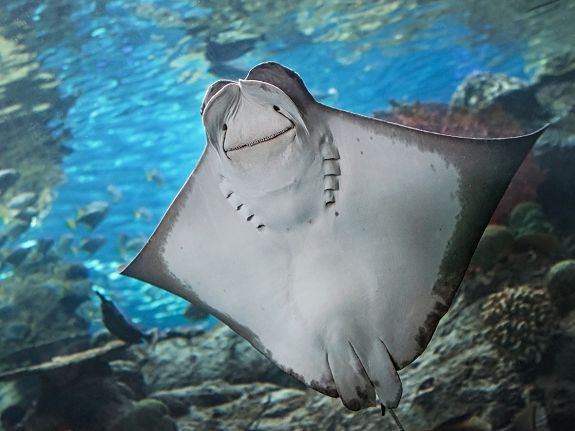 Habitats for our rays are Shark Lagoon and the Tropical Pacific Reef. Their diet is primarily shrimp but, occasionally, they are fed clams or sardines that have been cut into small pieces about 1 cm (2.54 in) long.

Eastern Pacific including Gulf of California, Costa Rica to Peru, and the Galapagos islands

Although this species is commonly found over soft mud or sand bottoms usually near coral or rock reefs, or near reef drop offs, these rays may also be found in the open ocean. They may also inhabit shallow seawater along coastlines and estuaries, intertidal marshes, and brackish lagoons. Depth range is generally in the upper 30 m (98.4 ft) of the water column, but deeper sightings have been reported.

Cownose rays are somewhat diamond shaped and have the long, pointed pectoral fins typical of the Myliobatid or eagle rays. Disc width is approximately 1.7 to 1.8 times the ray’s length and the long, slender tail is about 1.4 times the length of the body. The head extends beyond the disc. Unlike any other ray, the rostrum is moderately notched. There is a small, rounded dorsal fin near the base of the whip-like tail. There are one or two stings on top of the tail directly behind the dorsal fin.

The upper surface may vary slightly in color but is mostly dark brown, frequently with a golden, bronze tint. They are sometimes referred to as the golden cownose ray because of this coloration. The underside of cownose rays is white or whitish-yellow.

Cownose rays are primarily bottom feeders. They prefer a varied diet of mollusks and crustaceans. When feeding, they cruise the bottom with a fluttering motion using senses of smell, touch, and electrosensory abilities to find food on or in the substrate. The pectoral fins are used to create suction to remove substrate over prey. Sediment is also removed by sucking it through the mouth and expelling it through the gill slits. Teeth in both jaws of these animals are arranged to form hard flat plates. Hard-shelled prey is crushed between the plates

Like many cartilaginous fishes, cownose rays mature very slowly and both males and females generally exceed half of their adult size before breeding. Fertilization is internal.

Reproduction in cownose rays is called aplacental viviparity with histotrophy. This is one of three forms of live birth in which no placenta is involved that were formerly called ovoviviparity. In its early developmental stage, the embryo receives its nutrition from the egg yolk. Then it breaks and sheds the thin membrane of the egg capsule and receives its nourishment from a fluid called histotroph or ‘uterine milk’ which is secreted from villi, appendages in the wall of the female’s uterus. These uterine extensions also provide the embryo with oxygen and remove its waste.

In mid-summer after a gestation period of 10-12 months, only one pup is born. The larger the female, the larger the pup. The pup emerges tail first with its pectoral fins wrapped around its body. Its spines are pliable and encased in sheaths, preventing injury to the female during birthing. The natal sheath is discarded and the spines harden soon after birth. The pups resemble miniature adults and are independent at birth. Mating occurs again shortly after the birthing process.

These rays are found on the ocean floor and in the mid and top layers of the water column as individuals, in small aggregations, or in large schools. When near the ocean surface, they are occasionally observed ‘jumping’ out of the water.

Although this species is considered to be primarily a saltwater inhabitant, it can adjust to varying salinities such as those found in shallows of estuaries, wetlands, and other similar water areas where salinity varies on a regular basis, sometimes dramatically.

A major negative factor in the conservation of this species is the low reproduction rate due to slow sexual maturation and the fact that only one pup per year is produced. If the population is ever over-fished or otherwise devastated, recovery will be a very slow process.

In 1610 Capt. John Smith was stung by the Atlantic cownose ray while fishing near the mouth of Virginia’s Rappahannock River. Legend says he nearly died but was saved when Native Americans found an antidote in the mud of a nearby pristine waterway that is known to this day as Antipoison Creek. Smith’s one-time fishing spot also has a name—Stingray Point.

Cownose rays belong to the family Myliobatidae, which also includes eagle and manta rays. They have the familiar winged shape of many species of large rays. This species has a distinguishing characteristic, its rostrum, the basis for its common name, cownose. The pectoral fins separate at the front of the head into two lobes with a center crease which, combined with the indented notch in the ray’s cartilaginous skull, give the rays a cow-like appearance. The species is migratory, usually traveling in schools.