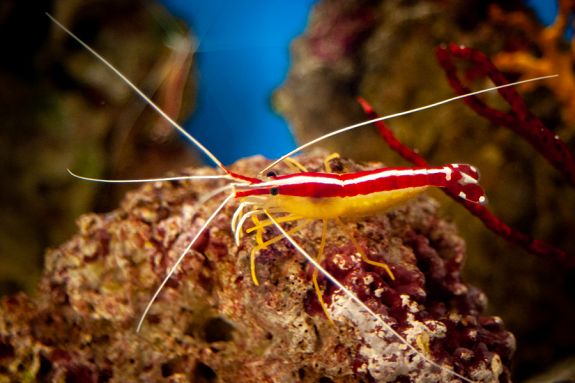 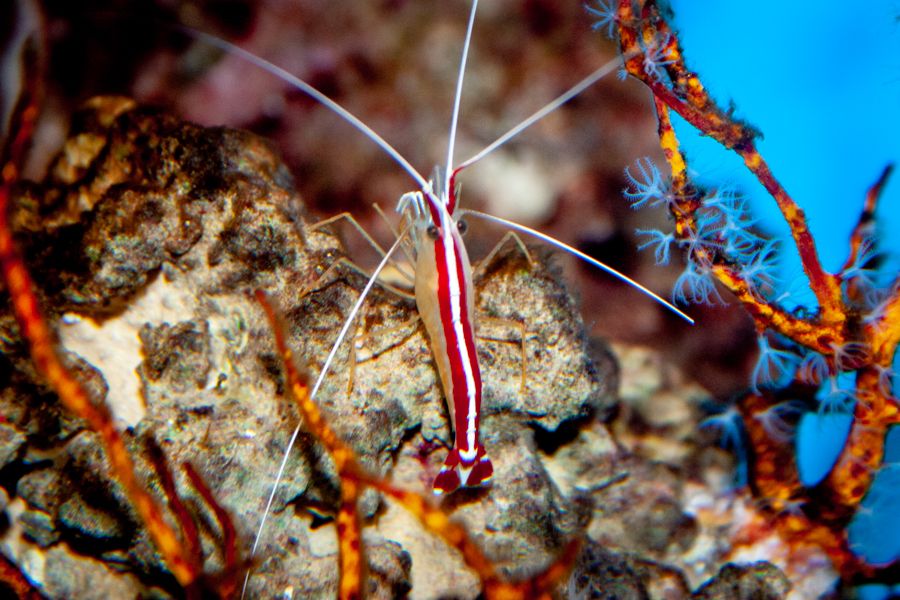 Aquarium visitors can see this species and even experience a cleaning at the mobile cleaner shrimp cart. This cart is often stationed in the Pacific Visions art gallery.

This species can be found in the Indo-Pacific Ocean and Red Sea.

Cleaner shrimp live in or around coral reef caves or rock ledges at depths of 16 to 131 feet (4 to 40 meters).

Pacific cleaner shrimp have a long, narrow, pale amber-colored body with a stalked eye on each side of their head. They also have longitudinal colored bands on the carapace (shell), and one white band down the carapace center separates two red bands on each side of its body. They have a red tail with white spots and two pairs of long white antennae. The front antennae pair is split, making the shrimp appear to have three pairs of antennae. These shrimp have ten pairs of pale amber-colored walking legs. The pair nearest the front of the body has forceps (pincers). Before the walking legs is a pair of white maxillipeds used for feeding. Beneath the thorax and behind the walking legs are paired pleopods known as swimmerets, used for swimming and brooding eggs.

The Pacific cleaner shrimp is omnivorous and feeds on parasites and dead tissue from fish.

These shrimp begin life as a male. They will become a hermaphrodite after a few molts, functioning as both male and female. There is no pure female form of this shrimp. This type of sexual maturation is known as protandric simultaneous hermaphroditism and is unique to Lysmata shrimp among other decapod shrimp. When this species has been observed in an aquarium or research setting, they will perform a mating ritual in which a pair of mature hermaphroditic shrimp will alternate their molting timing. Shortly after a molt, one shrimp will act as the male and will follow the other acting as the female, who will brood the fertilized eggs. When the next shrimp molts, the roles and apparent sex are reversed. In one spawning, adult shrimp will lay 200 to 500 greenish-colored eggs, which are attached to the “female” pleopods. Prior to hatching, the eggs swell and lighten in color, with some turning silver on the day of hatching. Hatching around dusk, the larvae, known as nauplii, become free-floating plankton. More developed larvae are called zoeae. As part of the plankton community, they feed on other plankton. Over the next five to six months, the zoeae will undergo at least fourteen molts as they grow and will then settle and metamorphose into a sub-adult stage. After several more molts, each occurring every three to eight weeks, they become adults.

Pacific cleaner shrimp are typically found in pairs and generally not seen in large groups in the wild. These shrimp will set up a cleaning station in a location on the reef. They will let “client” fish know that the cleaning station is open by performing a rocking dance from side to side as the fish approach.

This species is not evaluated by IUCN. These shrimp are difficult to culture in an aquarium setting, with most of the larvae not surviving to adulthood. Most shrimp sold in the commercial trade are wild caught, which could have negative effects on healthy reefs.

Known by various names, including Pacific cleaner shrimp, scarlet cleaner shrimp, and skunk cleaner shrimp, these shrimp play a vital role in coral reef ecosystems. Their common name is derived from the fact that a large portion of their diet is made up of dead tissue and parasites they remove from fish. They will set up a cleaning station on coral or a rock and wait for fish to stop by to be cleaned of dead tissue and parasites. These brightly colored shrimp have a red band on each side of their body separated by a white band down the middle of the back. As with members of the Order Decapoda, they have ten legs. This species is currently not evaluated by the International Union for Conservation of Nature (IUCN).