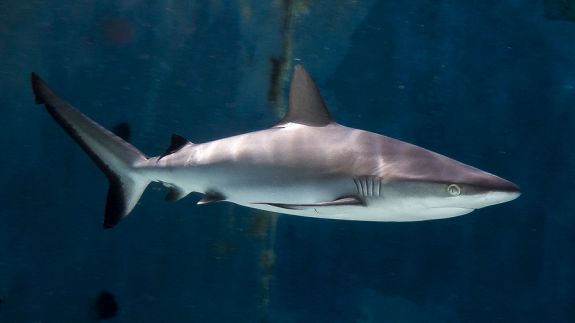 The Aquarium has two grey reef sharks in Shark Lagoon.

This species is widespread, ranging from the Indo-West Pacific to Central Pacific, Madagascar, the Mauritius-Seychelles area to the Tuamoto Archipelago, northern Australia north to southern China.

Grey reef sharks are typically found on coral reefs and near drop-offs into deeper water and in shallow waters close to strong currents. They may also be in open waters near continental shelves.

The species has a typical fusiform shark shape with anal fin; five gill slits; and a long, broad, rounded snout with its mouth behind the eyes and under the snout. It has round eyes. It has a grey-colored dorsal side with a bronze tint and pale to white ventral side. It has a broad black band on the edge of its tail with black markings on the pectoral fin tips. The dorsal fin is either grey or white tipped. Males have elongate mating claspers between their pelvic fins. Males are larger than females. Like other shark species it has a cartilaginous skeleton, and their mouth contains rows of teeth. As the teeth in front fall out, the ones behind them move forward to take their place.

These sharks mature at seven to eight years old. This species is viviparous, which means that the embryos are connected to a placenta-like yolk sac and the young are live-born. This species mates though internal fertilization. The female will give off pheromones and behavioral cues. The male will pursue her when he senses these clues. He will seize her with his teeth, which may cause serious wounds, although females have thicker skin on their backs, possibly helping to protect them from the male’s bite. All male sharks have a pair of reproductive structures called claspers located between their pelvic fins. Each clasper has a groove in it which directs sperm into the female’s cloaca during mating. Sperm may fertilize the egg at time of mating or may be stored until an egg is released. Gestation is twelve months. Females produce one to six offspring each time. There is no information on mating seasonality for this species.

These sharks will form aggregations or schools during the daytime. Even though they are active during the day, they are more active at night. They are slow swimming and may be territorial. They have a distinct agonistic display in which the shark will arch its back, point its pectoral fins downward, and swing its head laterally in a slow motion as it swims. These sharks are also curious, often approaching divers. They are not aggressive unless they feel threatened. They have high fidelity to a particular site, usually returning to the same site day after day.

Countershading allows the shark to be less visible to a predator from below. Grey reef sharks have an excellent sense of smell, and all their senses are acute. Sounds are detected through its lateral line system. Pores, located around the snout, called ampullae of Lorenzini, give sharks a unique “sixth sense” which lets them detect electromagnetic impulses, helping the shark navigate and locate prey.

The maximum lifespan for this species is estimated to be about twenty-five years.

IUCN lists this species as Near Threatened. This shark is subject to overfishing as they are used for human consumption in shark fin soup, in fishmeal, and other shark products. They are a slow-maturing shark so they are unable to reproduce fast enough to keep up with overfishing.

The grey reef shark is found around coral reefs and in warm open ocean waters. They are a social species forming schools during the day, but hunting alone at night. It has a dark grey dorsal side with an almost white ventral side. Grey reef sharks are slow to mature and have small litters, making it sensitive to fishing pressure. The International Union for Conservation of Nature lists this species as Near Threatened.