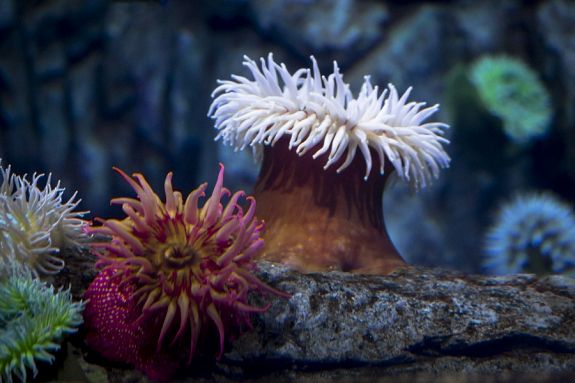 Fish-eating anemones typically grow to about 8 inches tall. | Andrew Reitsma/Aquarium of the Pacific

These anemones live in the cool waters of the eastern Pacific Ocean, from Alaska to La Jolla, California.

This soft-bodied animal has a smooth orange-red column with no spots or attached shells, sand, or other debris. The column is topped by an oral disc and has slender, short, white tentacles possibly tipped with pink or red armed with stinging cells called nematocysts. The disc is red to pale orange at the bottom of the tentacles to nearly white around their mouth. A sticky foot at the bottom of the column is used to adhere to a substrate.

This species feeds on shrimp, other invertebrates, and small fishes it captures with its tentacles. Nematocysts, located within the tentacles, are coiled threads containing venom and having a barbed end. When prey brushes against tentacles, nematocysts shoot out, killing or immobilizing the prey. Tentacles then pass the food into its digestive cavity through the mouth. Undigested food and waste is released through their mouth.

This species can reproduce asexually by splitting either vertically or horizontally. They may also reproduce by spawning eggs or sperm into the water where, if fertilized, they will develop into planktonic planula larvae, eventually metamorphosing into an anemone.

Fish-eating anemones are semi-aggressive, so they tend to be solitary.

Their foot allows these anemones to move if current conditions are not satisfactory or if they are being harassed by predators such as sea stars. To move, they inflate themselves, detach from the substrate, and then move along with the current.

Fish-eating anemones can live sixty to eighty years in the wild.

This species has not been evaluated by the International Union for Conservation of Nature, but they can be affected by commercial fishing trawlers, which damage their habitat, and water pollution.

Related to corals and jellies, fish-eating anemones are typically found in the cool waters of the eastern Pacific Ocean attached to rocks or pilings. Their genus name Urticina derives from the Latin word for a stinging plant called a nettle. The species name piscivora means fish eating. These animals have an orange or red column topped by an oral disc surrounded by many tentacles armed with stinging cells called nematocysts. Its mouth is in the center of the oral disc. At the opposite end of the column is their sticky foot, which they can use to move around.