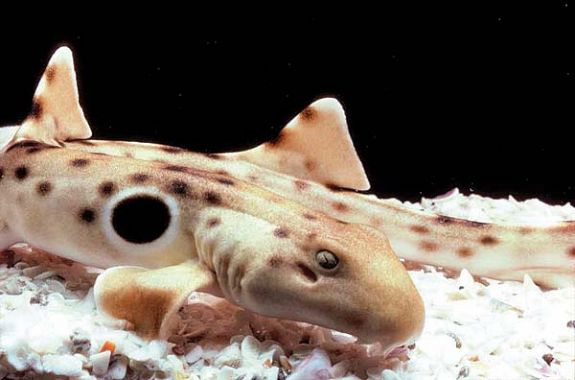 Our epaulette sharks can be touched in Shark Lagoon.

Although this shark is found to a depth of 50 m (164 ft), it prefers to spend most of its time in the warm, relatively shallow water of coral reef areas, usually over sandy bottoms. It is not unusual to observe an epaulette shark in a tide pool hunting for food.

The epaulette shark is easily recognized. It has a small, slender, almost eel-like form, a short, rounded snout with nasal barbells on the underside, prominent eyes, spiracles, and paddle shaped pectoral and pelvic fins. Two dorsal fins of similar size are located well back on the body. The anal fin is located just forward of the caudal fin. The caudal fin is narrow and has no ventral lobe. The caudal peduncle (to which the tail fin is attached) comprises over half the shark’s length. There are 26 to 35 tooth rows in the upper jaw and 21 to 32 tooth rows in the lower jaw. The teeth are small, with broad bases.

The base body color is a creamy or slightly brownish hue. An easily located identifying characteristic from which the fish derives its name, is a large, black, false eyespot, ringed in white, located on each side of the fish above the trailing edge of the pectoral fins. The body is marked with widely spaced dark brown spots. Juveniles have alternating light and dark bands over their body and fins, which break up as they mature.

Epaulette sharks are primarily bottom feeders and prefer substrates of sand and coral reef growth as source areas for their food. Although they are considered primarily nocturnal they may be observed searching for food during any part of the day. Their favorite times for feeding are at dusk and dawn. Food choices are mostly limited to various invertebrates. Recent studies on this shark’s food preferences indicated that the diet of juveniles tends toward a preference for polychaete worms and adults seem to prefer crabs. Both groups will also feed on small bony fish and shrimp. They are opportunistic feeders and will readily accept a variety of foods when available.

This species is oviparous. It reproduces by laying eggs. Fertilization is internal. While breeding the male commonly grasps one of the females pectoral fins or her body in the gill area in his mouth to stabilize the pair during the process. Most commonly two eggs are produced from each breeding incident with one embryo in each egg. A female may produce up to 50 egg cases in a year.

After the eggs are released into the water, a fibrous material on one side of the egg will commonly become entangled in coral or rocks and stabilize its location. Gestation is about 120 days, but will vary some depending on ambient water temperature. The newborn pups are about 15 cm (5.9 in) long. There is no parental care after the egg case is deposited.

Epaulette sharks are largely nocturnal and are most active in low water. While resting and not feeding these fish like to find protected areas under ledges and in nooks and crannies of coral growths where they can hide from predators. They are not territorial animals.

Because of their preference for shallow waters, epaulette sharks often come into close contact with humans and are easily observed. They can be approached quite closely before they swim away. They can, and do, swim, but most of their locomotion, especially during the feeding process, relies on the use of their paddle shaped pectoral and pelvic fins as legs and feet to produce a salamander-like walking gait. They adroitly make their way over sand substrates and into the intricate coral mazes where they find their food.

They often hide inside or below coral heads, though it is enough for the head to be covered even if the rest of the body is exposed. Sometimes they perch in the open on sandy flats or atop reefs facing into the current, a form of orientation known as rheotaxis that may improve respiration or predator awareness.

These animals are well adapted to their way of life. Their sensory and locomotion abilities provide efficiency in finding food and their color and marking patterns camouflage and help protect them from predators.

Epaulette sharks are commonly found foraging in small tide-pools remotely located from active ocean water. These tide pools characteristically are low in oxygen concentration and unable to support most fish life. Research has shown that this species has the ability to selectively route blood to essential parts of its body and it also appears that its nerves are designed to function in low oxygen circumstances. These features open up extended feeding opportunities for these fish that are not available to other species.

Special modification of the attachment, skeleton, and musculature of the paddle shaped pectoral and pelvic fins provides strength and allows for a great range of movement, permitting the unique “walking” pattern of this animal. Some scientists have suggested that this type of movement might be similar to a movement pattern used by the first vertebrates that moved from an aquatic to a terrestrial environment.

It is reported that this species may live to 20 to 25 years.

The epaulette shark is listed by the IUCN Red List as a species of Least Concern.

This species has some natural predators in the form of larger fish such as sharks and groupers. It has little, if any, value as a commercial food fish, is not considered a sport fish and is not generally a targeted animal except for the aquarium trade. Abundant in its range and easy to catch, it is sometimes taken by subsistence fishers. Public aquariums often display these fish and they readily reproduce in an appropriate aquarium protective environment.

When feeding, most sharks swallow their prey whole or if it is too large, will bite off large chunks and swallow them whole; however, the epaulette shark is sometimes observed chewing its food with a small portion sticking out of its mouth. The food can be seen moving back and forth in the mouth until it is finally suitable for swallowing.

The epaulette shark is capable of surviving with very little oxygen for an hour without experiencing any ill effects and at a much higher temperature than most other animals tolerant of low oxygen levels.

This small, attractively marked shark is a rather interesting animal. It swims, but most of its movement is accomplished by “walking” with the use of several of its fins. Its slender body permits easy navigation in and around the intricacies of coral reefs where it feeds primarily on bottom-dwelling invertebrates.