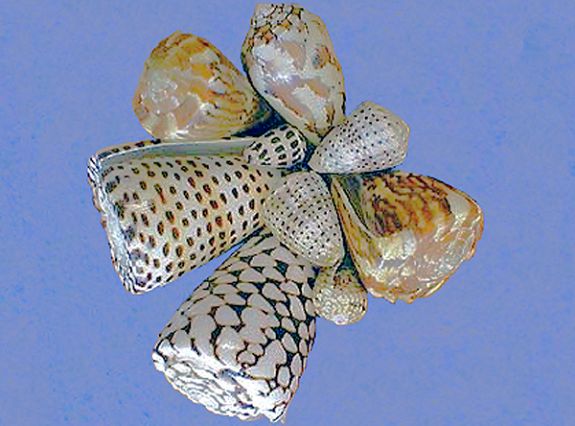 These animals are not currently on exhibit at the Aquarium.

Most cone snails live in relatively shallow water near coral reefs, hiding in the sand, under coral shelves, or under or near piles of rubble. Some live among mangroves.

All cone snails are wide at one end and narrow at the base (the typical “cone” shape). All have spires, (whorls above the body whorl) of varying heights at the wide end. A whorl is a full turn of the shell. Shell bodies (whorls) can be dull to very shiny, smooth to lined and bumpy. The shell’s aperture is long and narrow and does not have an operculum. The foot is strong and muscular and may be colorful. The siphon is well developed and may also be colorful.

Radular teeth are contained in the radular sac, and the size, number and design of these teeth varies by species. The body mantle is thickened at the edge, and in one area a cavity for gills exists between the mantle and the body. The head has two tentacles, each with an eye about halfway down the outer surface. Colors and patterns vary widely. Most have a background color of some variation of white, cream, pink or blue and are patterned in black, brown, orange or yellow, while some may be only one color.

Cone snails are divided into three groups according to their diets:

When catching prey, cone snails first scent it with chemoreceptive cells on the proboscis, gently touch it with the proboscis, and then, lightning fast, sting the prey with the radula, (which is attached by a thread), and inject the venom. Within seconds, the prey is immobilized. The thread is then retracted and the prey engulfed through the expanded proboscis and moved to the stomach to be digested.

Although reproduction in cone snails has not been widely studied, it appears that most of these snails have separate sexes and fertilization is internal. Egg capsules of various shapes are laid and attached to substrate. Each capsule contains a varying number of eggs. Two types of hatchlings have been described, the veligers (free-swimming larvae) and veliconcha (basically baby snails).

Most cone snails are normally active at night; however, some species hunt at dusk and dawn.

These slow-moving snails evolved into one of the fastest known hunters in the animal kingdom in their efforts to catch prey. Their average attack lasts only milliseconds. They use stealth and deliver paralyzing venom using stinging harpoons. Cone snail venom is very complicated chemically, varying widely in its makeup from species to species, whether a piscovore, the most toxic, or a vermivore, the least toxic; and with each individual sting or attack.

Cone snails are among the most toxic creatures on earth. Over 30 cases of envenomation have been documented worldwide with some fatalities. The venom, which has hundreds of active components, inhibits transmission of neuromuscular signals in the body, initially causing numbing and/or tingling at the site, which spreads to the affected limb, then to the whole body.

Highly prized for the beauty of their shells, cone snails are in danger of being over-harvested by collectors. Some countries have put restrictions on their collection. Cone snails are also heavily collected for scientific studies on potential uses of the venom as medicines. Both reasons for collection could result in depleted populations. At the present time, no cone snail species are listed as endangered or threatened although there is increasing concern among scientists that some species should be and some countries have adopted regulations governing their collection and sale.

California’s cone snail, Conus californicus, is found from San Francisco to Baja where it lives in sand or gravel near rubble, from the low tide mark down to 30 m (100 ft). It is yellowish-brown with a faint white band, and very small, 1.9-4.1 cm (0.75 -1.6 in) long. It feeds on a wide variety of foods, but it prefers other snails. Although venomous, the California cone snail’s toxin is not very potent.

In 2005 the FDA approved two drugs synthesized from the venom of cone snails. Used to treat severe chronic pain, these drugs are reported to be non-additive and 50 times more effective than morphine at controlling pain.

Cone snails are among the most venomous creatures on earth. Among the most toxic are the textile, geographic, and tulip snails and there is a higher risk of death if the geographic and textile snails are involved. All capture their prey by means of harpoon-like hollow teeth (radula) that are rapidly jabbed into their prey to inject the toxic venom. Attacks on humans usually occur when a cone snail is either stepped on in the ocean or picked up from the water or the beach.