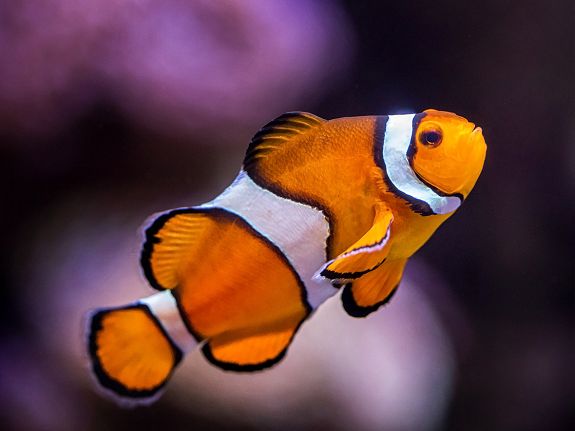 Clownfish are found in an exhibit in the Aquarium’s Tropical Pacific Gallery. They are fed krill (a small shrimp-like animal) and pieces of finely chopped seafood.

Native to the Andaman Sea to Northwest Australia, central Indonesia and the Philippines, and southwest Japan. A rare black variation is found around Darwin, Australia.

Clownfish live on coastal seaward reefs and in shallow and sheltered lagoons at depths of 1-12 m (3.3-39.3 ft). They have three anemone hosts on which there are dependent—outer reefs: magnificent anemone Heteractis magnifica and leathery anemone Heteractis crispa, and on shore reefs: giant carpet anemone Stichodactyla gigantea.

The body shape of clownfish is perch-like—oval and laterally compressed with an interrupted lateral line. Their body color is a bright orange with three white bars, the middle with a forward bulge centrally. Thick black bands around the white bars separate the orange and white portions of the body. The bands range from a thick line to patches of black on the sides of the fish. The fins of this species have black tips.

They are carnivorous omnivores. They feed primarily on zooplankton but also eat bottom dwelling invertebrates, and algae They also nibble on the tentacles of their host anemones at times.

Clownfish are protandrous hermaphrodites, meaning that they all mature as males but have the ability to change their sex to female. A typical harem living in the host anemone consists of a breeding pair and up to four juveniles (non-breeders). The larger fish of the pair is the female. She controls the dominant male from becoming a female while he controls the juveniles from becoming mature males. Should something happen to the female, the male of the breeding pair changes to a female, rapidly increasing in size. The next largest male usually becomes the breeding male.

Courtship begins three to five days before spawning and includes substrate biting in which the fish bites rocks and corals, extension of fins, and chasing. Initially, the male prepares a nesting site on a bare rock or coral pavement substrate close to the anemone, often just under the anemone’s tentacles or at its base. As spawning nears, the female helps clean of debris and algae. The nest can cover an area of 4-10 cm (1.5-3.9 in). The breeding pair begins to nip at the anemone’s tentacles that are near the spawning site, causing them to partially retract so the nest area is more open. The female makes several runs over the nest, swimming with her belly brushing against the site. Eventually she pushes her belly against the site, and moving herself over the nest with her pectoral fins, releases a trail off eggs. Tiny filaments on the end of the eggs attach them to the substrate. The male swims behind the female and fertilizes the eggs. Between 100 and 1000 eggs are laid in several spawning passes, the number depending on the age of the female. Older females lay more eggs.. The initial pink to orange coloration of the eggs will gradually change to a dull gray or brown and shortly before hatching, to silver.

For the next six to seven days the male tends the nest rarely helped by the female. He fans the eggs with his pectoral fins to aerate and clean them of settled debris, eats any that are infertile or damaged, and aggressively chases away predators. Hatching occurs shortly after sunset. After hatching, the larvae are transported into the mid to upper water column by ocean currents, where their larval phase will last for about seven days. They then become bottom dwellers looking for their own host anemone. If lucky enough to find one before being consumed by a predator or chased by the anemone’s current inhabitants, they will become the youngest and lowest member of a community perhaps with hopes of eventually becoming the dominant female.

Clownfish are found singly, in pairs, and in small groups. They rarely move more than 30 cm (12 in) from the protection of their host anemone. They are territorial, aggressively defending their host and an area around it. Aggression consists of tail beating, chasing, and biting at the intruder’s head, abdomen, and fins.

These fish aerate the water around the tentacle of their host anemone, remove waste from its oral disc, and provide nitrogenous waste that the anemone uses as food. Contrary to popular belief, they do not capture food for the anemone.

Some researchers believe that the mucus layer covering an clownfish’s body has a special biochemical makeup that provides the fish with protection from the anemone’s stinging cells, its nematocysts. It is believed the anemone fails to recognize the fish as a food source because of this chemical composition so it does not fire its nematocysts. Other researchers theorize the mucus contains the same chemical signature as the host anemone so that the stinging cells never fire. It is known that if an clownfish leaves its host for a period of time, it has to re-adapt to the host stinging cells. To do this the fish returning to the host goes through an elaborate dance-like ritual. It tentatively touches the anemone’s tentacles with only its ventral fins, then its entire belly. Acclimation takes several hours.

The ability of juvenile clownfishes to locate the same host anemones preferred by their parents is believed to be due to an olfactory (smell) stimulus imprinted at the time of egg incubation. The eggs in the nest site located close to the host anemone. Imprinting occurs due to exposure to the odor of mucus of host species-specific mucus released from the anemone’s oral disc and tentacles. At the present time sight recognition is not believed to be a factor in recognizing the host anemone.

Clownfish live about 8 years in the wild and 12 years or more in a protected environment.

Over-collection of this species for the aquarium trade has impacted the populations in some areas. Degradation of their coral reef habitats as a result of development, natural disasters, and global climate change is a future threat. Predators include other damselfishes, sharks, stingrays, and at night, brittle stars. They are not listed on the IUCN Red List; however, some governments are controlling the numbers harvested for the aquarium trade. The great Barrier Marine Park Authority regulates permits issued to aquarium fish dealers who collect within the Great Barrier Reef.

The size of the black bands that separate the orange and white portions of the clownfish’s body are influenced by the species selected for its host. Clowns that live with the giant carpet anemone Stichodactyla gigantea are deeper black and much thicker than the margins of the clowns that live in the sea anemones, magnificent anemone Heteractis magnifica or leathery anemone Heteractis crispa.

The clownfish has a symbiotic relationship with selected sea anemones that provide its habitat.