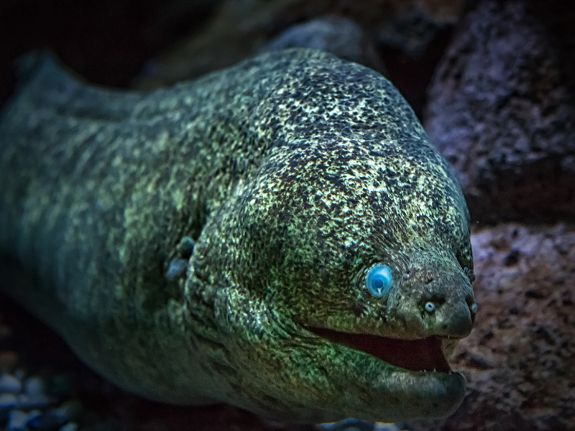 California morays have several Aquarium habitats, all in the Southern California gallery: Honda Blue Cavern, Amber Forest, and a habitat shared with the California spiny lobsters.

These eels inhabit rocky reefs as deep as 40 meters (130 feet), but most commonly they live in waters from tide pools to approximately 20 meters (65 feet). They spend the majority of their time between rocks and crevices with only their head protruding.

The California moray has a long, snake-like body with small eyes, prominent jaws, tube nostrils, and tapered tail. It is the only eel in California that does not have pectoral fins or scales. The body shape and lack of fins, scales, or gill covers allows this species to move quickly in and out of rocky crevices. The round gill opening is visible on either side of the head, behind the jaw muscles. Small, pointed teeth are visible as their jaws open and close in order to breathe. Their skin is often mottled and can range in color from dark or light brown to green.

California morays can grow up to 5 feet (1.5 meters) long.

Morays prey on small fish, crustaceans (including the red rock shrimp), and octopus. Larger morays have been found with flying fish in their stomachs. They are nocturnal predators that utilize their strong sense of smell to seek out and ambush prey as they hunt the rocky reef at night.

Taste and touch are very important senses to California morays. Their lower jaw is covered with taste bud-like structures used for sensing food. When food is tasted, the moray’s mouth immediately grabs for the food.

Unlike many other predators, morays are not able to open their mouths fast enough to suck in prey. Instead, the eel has a second set of jaws inside its throat, and hinged jaws that lock into place when pulled forward to ensure its prey does not escape. When the front set of jaws bites into the prey, the second set of jaws springs forward to grab the prey and take it down the eel’s throat.

California morays mate and spawn in warm waters off of Baja Mexico. Sperm and eggs are broadcast into the water where fertilization takes place. Hatched larvae may drift up to a year before settling and maturing into their adult form.

Morays less than 15 years old are rarely found off the California coast. Researchers believe that they do not breed off the coast of California due to the water temperature being too cold for reproduction. It is believed that the morays found in California drifted north with the current before settling in rocky crevices along the coast.

Most fish are able to force water over their gills by opening and closing their gill covers. Without gill covers, the California moray must open and close its mouth in order to breathe. Casual observers of this behavior have reported it looks like the morays are talking, gasping for air, or trying to look threatening, when in reality the opening and closing of the mouth is necessary to push oxygenated water over their gills.

These eels spend the day in their cave or crevice with only their heads or noses showing, but they emerge if tempted by food or curiosity. At night, they emerge to hunt for prey.

California morays have a mutualistic relationship with the red rock shrimp (Lysmata californica). Almost every moray crevice contains these shrimp species that serves as a cleaner shrimp. The morays will even allow the shrimp to clean their mouths of bits of food and parasites. Although the morays benefit from this cleaning relationship while protecting the shrimp from predators, they are known to eat the shrimp.

The moray’s long, slender body without fins or protrusions allows it to easily maneuver between rocks and swim backwards into crevices. Their skin secretes a protective mucus film that protects them from injuries thus enabling them to create a burrow with walls that allow them room to breathe while on sandy ocean floors.

It is believed that these eels have a life span of thirty years or longer.

While California morays do not receive any special protection nationally or internationally, there are fluctuations in local population numbers that are slow in recovering even if the negative impact has been small. One study in La Jolla, California revealed that it took two years for the local population to recover after the removal of all morays caught in fish traps over a period of several weeks.

Bites to humans are not common, and are usually the result of the moray’s poor eyesight or a diver sticking their hand into a crevice where a moray is hiding. Their sharp teeth not only point backward making it difficult to pull out unlucky fingers but their teeth are also covered in bacteria, creating a painful bite that can easily get infected.

Octopus is a favorite food of the California moray, but ink from the octopus can prevent the moray sense of smell from functioning for as long as two hours.

Despite its snake-like appearance, and lack of fins or scales, the California moray is a fish. Morays may have a frightening appearance, but they are actually very timid fish that have a keen sense of smell and poor eyesight. The California moray is also known for its unique adaptation, a second set of jaws inside its throat that spring forward to help it to swallow food.