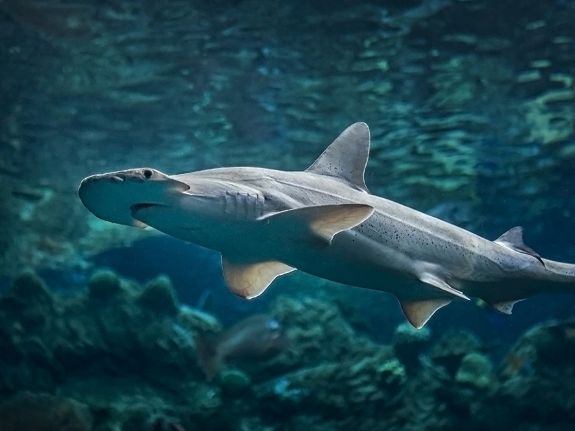 They are currently in our Tropical Reef Habitat.

Western Atlantic: from Rhode Island (occasionally) south to the Gulf of Mexico and Brazil, and throughout the Caribbean including Cuba and the Bahamas. Eastern Pacific: southern California (rarely above San Diego) to Ecuador

Their migrations and reproductive behaviors result in their inhabiting a variety of seasonal habitats in temperate and subtropical waters including the surf zone, bays and estuaries, on coral and rocky reefs, and over sandy and muddy bottoms. They are also found on the continental shelf to depths of about 80 m (260 ft) but more commonly at 10-25 m (31-82 ft).

Bonnetheads feed during the day with foraging activity peaking in the late afternoon. The varied diet of bonnethead sharks includes crabs, shrimps, bivalves, snails, and some small bony fishes; however, they are also known to eat seagrasses. This menu of primarily hard-shelled invertebrates differs from that of other hammerheads which usually do not eat such prey. The tooth structure and jaws of bonnetheads has been adapted for feeding on both hard-shelled and soft prey. They have small sharp teeth at the front of their jaw for grasping soft-bodied prey, and broad, flat molar-like teeth at the back for crushing hard-shelled invertebrates. Like most sharks, they have rows of teeth in place ready to replace any that become worn or lost.

The primary diet of juveniles is swimming crabs and shrimps.

Females reach maturity when they are 75-84 cm (30-33 in) in length. Males are 52-75 cm (20-30 in) long. After mating, the female can store the sperm for four months prior to actual fertilization of the eggs. When the embryos first emerge from the egg, they absorb the yolk for nourishment. The sac attaches to the female’s uterine wall to form a yolk-sac placenta, through which nourishment is received from the female. Females move to shallow bays and estuaries during the pupping season; whereas males move to a different location, an adaptation believed to prevent males from feeding on their own pups. Females are prevented from doing so because of a loss of desire for food.

The female delivers 4-14 pups that are born live. The pups are 30-40 cm (12-16 in) long at birth. The gestation period is only five to six months long, the shortest of all sharks.

Scientists have observed at least 18 different behaviors that bonnetheads display toward other individuals in a number of ways. Some of these are: males adopt a threat posture known as a “hunch” toward others in the group, and will physically bump and bite females or smaller males; patrolling; head-shaking; and jaw-snapping. It is believed that the purpose of these displays is to establish and/or maintain dominance.

Preferring a water temperature of at least 15o C (70o F), bonnethead sharks migrate in large schools to warmer latitudes in the winter and to cooler waters in the summer. Rarely alone, there are usually 5-15 sharks in a school of either males or females. The schools sometimes number 100 and occasionally 1,000.

The unique head shape of the bonnethead shark, like that of other hammerhead sharks, may give them added lift, enabling them to make sharper turns than other sharks. The wider head also provides space for more ampullae of Lorenzini to help detect prey, and also possibly function as a navigation aid.

The location of the eyes of these sharks at the far sides of their heads increases their field of vision. As they swim, they roll the head from side to side, taking in the scene on all sides and the front. Like other sharks, their eyes have a special organ, the tapetum lucidum, which reflects light back to the retina of the eye, allowing them to see in low light. They also have a membrane that comes up from beneath their eyes to protect them during feeding.

The life span of bonnethead sharks is believed to be about 12 years.

Like most sharks, bonnetheads are under pressure as a result of overfishing by small-scale fisheries. They are both targeted and caught as by-catch. When targeted, the meat is sold fresh, salted, or dried for human consumption. They are occasionally processed into fish meal. Since bonnetheads are an inshore coastal species, coastal development may have a major impact on their survival. NOAA’s National Marine Fisheries Service laboratory in Panama City, Florida is currently doing population modeling on bonnetheads. One study called Year of the Young (YOY) has shown that the mortality of young bonnetheads is high.

A bonnethead shark excretes a unique cerebrospinal fluid (Cl-excess) that is believed to be used to let other bonnetheads know it is in the area.

Bonnethead sharks are the smallest of the 10 hammerhead shark species. The head shape of these sharks is unique among the species. Unlike most species that have straight heads with notched edges, those of bonnetheads are smooth and rounded between the eyes. These sharks are highly migratory. Although they are common, coastal inshore sharks, only one unprovoked attack on a human has been recorded.