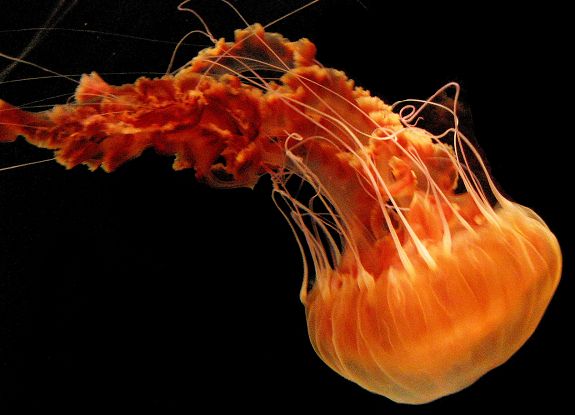 This sea nettle is an infrequent visitor to local Southern California waters. | Aquarium of Pacific/Andrew Reitsma

The black sea nettles’ Aquarium habitat is in the Southern California/Baja gallery.

Except for periodic appearances in California ocean waters, the distribution of this jelly is largely unknown. It does occur in Baja California, Mexico (Isla San Quentin). Up to May 2015, the most recent appearances were in 2010 and 2012 in San Diego, California waters and 2013 in south Laguna Beach, California, waters.

During periodic appearances of black sea nettles in Southern California waters, they have been observed in deep ocean waters a nautical mile (1.2 statute miles) offshore and in calm coastal waters, and bays. Currents and winds bring the jellies on shore.

The bell is fleshy with a smooth surface lacking nematocyst warts. The four frilly oral arms are interlocked and spiral counter-clockwise. There are 32 marginal lappets, the touch sensors, that are square with rounded corners. Between lappets there are 24 long, thin tentacles that are arranged in sets of three adjacent to one of the eight rhopalia (sense organs). The manubrium is stiff and thick. It partially encircles four septa (walled partitions) on the subumbrella out of which project finger-like structures containing the gonads.

The opaque bell of this sea nettle is commonly described as being purple to black; however, those are the colors of the “giant” specimens. The bells of immature and small mature jellies are reddish to maroon in color. Tentacles are whitish-pink and oral arms a reddish-pink in both large and smaller black sea nettles. Around the bell rim of mature jellies and extending upward one-fifth to one-quarter of the bell’s height, there is a reticulated pattern of light brown to tan specks. This pattern is lacking in young nettles.

The black sea nettle may also have a diet similar to that of the purple-striped jelly, preying on copepods, larval fishes, planktonic crustaceans, fish eggs, pelagic tunicates, ctenophores (comb jellies), and other jellies.

The reproductive cycle of this jelly in the in the wild is not known. A collaborative team of researchers from several aquariums and the University of California at Berkeley has been successful in propagating the jellies in laboratory settings. When the jellies swarmed in local waters in 1999, reproductive systems of adult males and females that washed ashore were sampled. Sperm and eggs incubated together for 24 hours produced swimming planulae (larvae). These settled to become polyps that cloned non-motile polyps. Eventually, strobilation took place and ephyrae were released that became mature medusae.

This jelly has a symbiotic relationships with both larval and juvenile crabs (Cancer sp.) that travel with the jelly host until the crabs are ready to become bottom dwellers. The crabs have been observed consuming detritus-laden mucus from the oral arms. Larval and juvenile forms of the Pacific butterfish, Peprilus simillimus, have also been observed swimming behind the bell close to the oral arms into which they could swim to escape danger.

As a sea nettle swims, its tentacles trail behind. When the highly contractile tentacles touch prey, nematocysts are immediately discharged and the tentacles contract, bending toward the nearest oral arm, while at the same time, the oral arm moves inward, turns slightly, and draws its inner layer near the food. The tentacle then releases the prey. The oral arm grasps the food and starts a muscle contraction that drives the food into the oral arm groove and then to the manubrium, and finally to the gastric cavity. The oral arms also collect food directly without use of the tentacles.

Although one of the individuals stung by a black sea nettle washed up on a San Diego, California, beach described the experience as “no picnic,” the toxin of this sea nettle does not seem to be as potent as that of its relative, the Atlantic sea nettle.

Like other sea nettles, the black sea nettle has both radial and coronal (circular) muscles. In the swimming stroke the coronal muscles act first, drawing the umbrella inward and downward. The radial muscles then cause a further flexion of the umbrella. There is an initial backward thrust of the umbrella on the water. An outward jet of water is produced with each contraction. There is sufficient drag on the bell to virtually stop the jelly in the water at the end of recovery. The animal must then accelerate again during the next beat.

Because of its infrequent appearance on recreational beaches, the San Diego beach tourist industry is not affected by a seasonal appearance of black sea nettles to the extent that the Atlantic sea nettles affect the Chesapeake Bay watersports and fishing industries.

Giant black sea nettles appeared in droves along the San Diego shoreline in the summer of 1989. Then they mysteriously disappeared. The giant drifters reappeared again ten years later in the summer of 1999. More recently they have appeared in 2010, 2012, and 2013. Some scientists believe this more frequent appearance is an indication that human activities are changing the ocean ecosystem.

The black sea nettle was the largest invertebrate given a scientific name in the 20th century and that did not occur until 71 years after it was discovered.

Except for periodic appearances in California ocean waters, the distribution of this jelly is largely unknown. It does occur in Baja California, Mexico (Isla San Quentin). Up to May 2015, the most recent appearances were in 2010 and 2012 in San Diego, California, waters and 2013 in south Laguna waters.