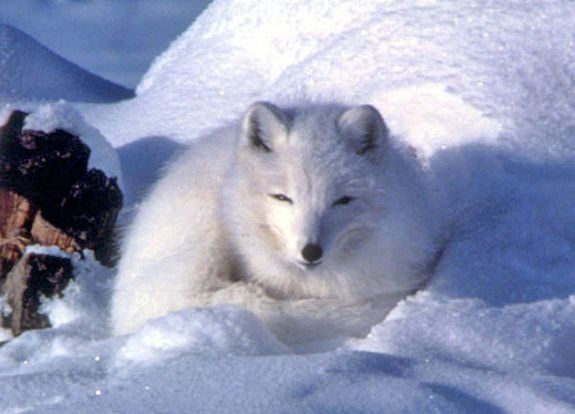 The Arctic fox's white winter coat blends into the snow. | Courtesy of USFWS

Although not on exhibit in the Aquarium, the Arctic fox is included in our website animal database to expand on the information originally presented in the Arctic & Antarctic: Our Polar Regions in Peril exhibit, which was open in 2011 and 2012.

Arctic foxes inhabit both inland and coastal terrain. In the summer the arctic fox normally lives in the tundra north of the treeline but it will venture south into the boreal forest when its food sources decrease in the tundra. In winter arctic fox move extensively out over the ocean covered ice pack. Each fox has its own home range.

The arctic fox has a compact body with small, rounded, curled back ears. a small black nose, short stubby legs, and a long bushy tail. The arctic fox is the only canid that changes the color of its coal. Its fur is dark gray to bluish brown with lighter underparts in the summer and white or creamy white in the winter. The rare blue phase is dark blue-gray in summer, pale blue-gray in winter. Juveniles have white facial markings.

The Arctic fox is an opportunistic eater, consuming just about whatever organic material it comes across. It eats small mammals such as lemmings, voles, and ground squirrels; birds; insects; eggs; berries carrion, and even the feces of other animals. Lemmings and voles are a major food item, and fox population often peaks every four years in a cycle that follows lemming population changes. In the summer, if food is plentiful, the arctic fox carries extra food to its den and caching it in a crevice or under rocks, or by making its own freezer by digging a hole in the permafrost and storing its food there.

The fox usually hunt in darkness, relying on an acute sense of smell and hearing to detect prey. In winter it hunts lemmings that are under the snow. It traces the lemmings’ movements under the snow and then pounces and digs rapidly down to the lemming’s tunnel or nest. In summer, it uses stalking maneuvers to catch lemmings when they are scurrying across the tundra. In addition to lemmings, the winter food of arctic foxes consists of arctic hares, ptarmigan and carrion.

Arctic fox are sexually mature by 10 months of age. Mating takes place between February and June each year: however, if the preceding winter was severe and the foxes are malnourished, they may breed later than usual or not at all. The female may build a new nest or an old one may be utilized. Den sites are typically located in areas free of permafrost—ridges of coarse gravel, or on the tops of banks of lakes or rivers where the soil is sandy, dry, and stable. The den sites are usually free from snow earlier than the surrounding landscape because of the good drainage. Dens may be up to 300 years old and possess as many as 100 entrances. Before the birth of the kits, both adults share the responsibility for cleaning out a portion of the den and digging one or more new entrances

The female gives birth to six to twelve dark furred young called kits. The number fluctuates with food availability and geographic location. Foxes inhabiting coastal areas have smaller litters than foxes that occupy inland tundra. The newborn pups are tiny and helpless. They are born blind, deaf and toothless with a soft dark-brown undercoat that grows rapidly and turns paler after a few weeks. Both the female and the male take care of the young kits. The male guards the den and brings food to the female and her kits. The young foxes emerge from the den after three or four weeks and are weaned at about six weeks. They are usually independent by mid-August when they are abandoned first by the male fox and then by the vixen. The foxes then disperse for the winter.

The Arctic fox is nomadic, moving from place to place looking for food. In the summer the fox live in family groups made up of a male, one or two females and the kits. The second female is usually a leftover kit from the year before, and doesn’t breed, helping care for the young. A sleeping fox protects its nose from the cold by curling its bushy tail around its body.

The adaptations of the Arctic Fox to its subzero habitat include a compact body with short legs and ears reducing exposure to the cold and loss of heat through extremities, dense fur, and thickly haired footpads, which insulate against the cold and provide traction on ice. Winter fur develops in October when the coat thickens, and the new hairs are much lighter, providing camouflage against snow and ice.

Populations of Arctic Foxes peak about every four years, paralleling and following by roughly one year those of lemmings, a chief food. When prey is scarce and hunting territories are consequently expanded, young and old foxes unable to defend their territories may be forced to emigrate. They travel south up to several hundred miles; few return north.

Arctic Fox remains have been found in a number of Pleistocene deposits over most of Europe and large parts of Siberia. The Pleistocene dates from 2.588 million (±5,000) to 12,000 years before present. Their distribution was along the ice edge.

The Arctic fox is not protected in most of its range; however, there are Sweden, Norway, and Finland (where the fox may be extinct), have granted it legal protection. It is defined as a “priority species” in Europe under Actions by the Community relating to the Environment (ACE). Legal trapping of Arctic fox for its fur is limited to licensed trappers during a defined trapping season in Alaska, Russia, Canada, Greenland, and Norway

Climate Change: With climate change shrinking the ice pack in the polar regions, the arctic fox’ environment is changing dramatically. The fox relies on the ice pack for survival during the bleak winter. With fewer predators to compete with on the ice, it has a better chance of survival. However, the increasing shrinkage of the ice may drive the foxes to greater foraging on land. With these greater incursions into human settlements there is an ever-increasing chance of human-wildlife conflict.

The IUCN has listed the Arctic fox as one of the ten animals most vulnerable to climate change as a result of changes in its tundra habitat. As the tundra territory of the Arctic fox has warmed, the red fox, whose habitat is further south in warmer climate, has begun to invade Arctic fox territory. The red fox is the Arctic fox’s greatest predator, a more skilled hunter, and a faster runner. They are known to prey on Arctic fox adults and kits. The encroachment of red foxes into more northern areas has already been documented and will probably continue as the tundra warms.

The Arctic fox is being used as a keystone species in a study being done by Norwegian scientists on how climate change will affect Arctic predators it is found through the tundra area, as well as being in clear decline in many areas. The population is on the decline in particular in the southern part of the tundra and in the Scandinavian high mountains. It is in danger of disappearing from Norway.

Arctic fox that have blue phase fur occur in only about one per cent of inland populations and in from one to five percent of foxes on coastal areas and the arctic islands. However, in Alaska’s Aleutian and Pribilof Islands, the blue phase predominates whereas, In southern Greenland, the proportion of the white and blue colors is equal.

The arctic fox is a member of the canid family that includes wolves, dogs, and other fox species. It is an incredibly hardy animal that lives year-round in the northern hemisphere’s circumpolar region where it has adapted to be able to survive frigid arctic temperatures as low as -50°C (–58°F) in the treeless lands where it makes its home. But will it be able to adapt to the impacts of climate change on its environment? The International Union on Conservation of Nature (IUCN) lists the Arctic Fox as one of the ten animals most vulnerable to climate change.