Home > Aquarium Blog > The Seal that Rescued a Rescuer

The Seal that Rescued a Rescuer 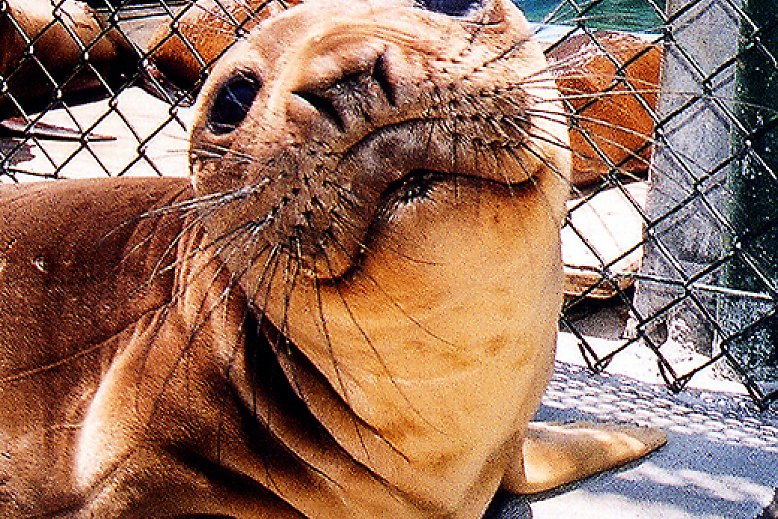 Gimpy; The seal that saved me from a mauling. Hugh Ryono

Gimpy; The seal that saved me from a mauling. Hugh Ryono 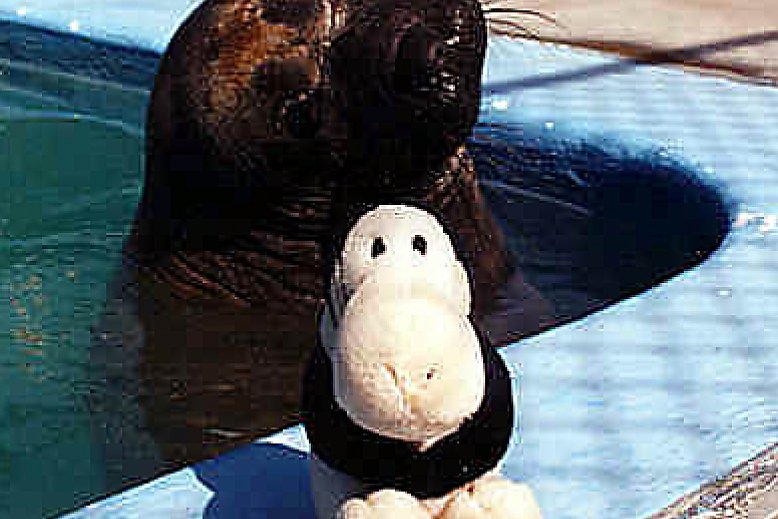 This is my favorite picture of Gimpy and it sits in a frame on a shelf in my house. Hugh Ryono 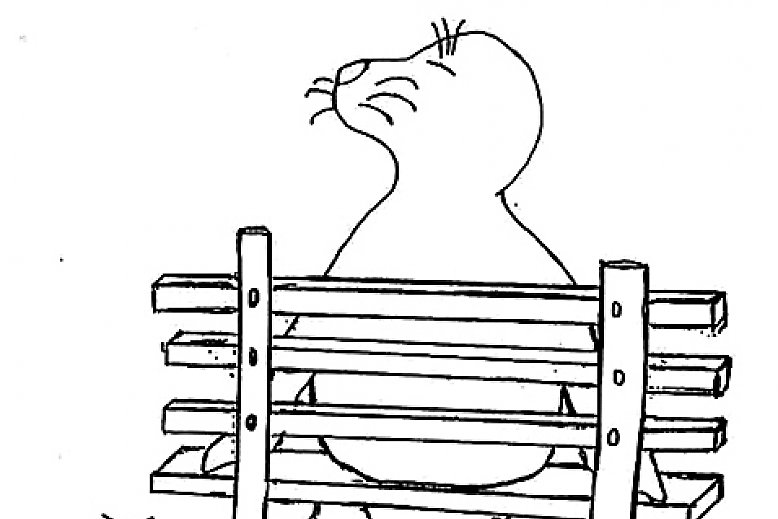 This is a caricature I drew of Gimpy just before she left for Portugal. The Forrest Gump of Elephant seals. Hugh Ryono 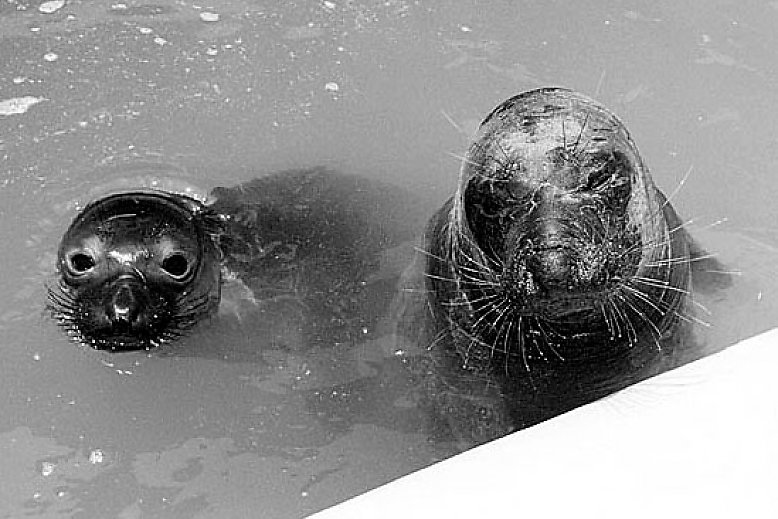 By her second spring, Gimpy (right) outweighed the new Elephant seal pups (left) by over one hundred and fifty pounds. Hugh Ryono 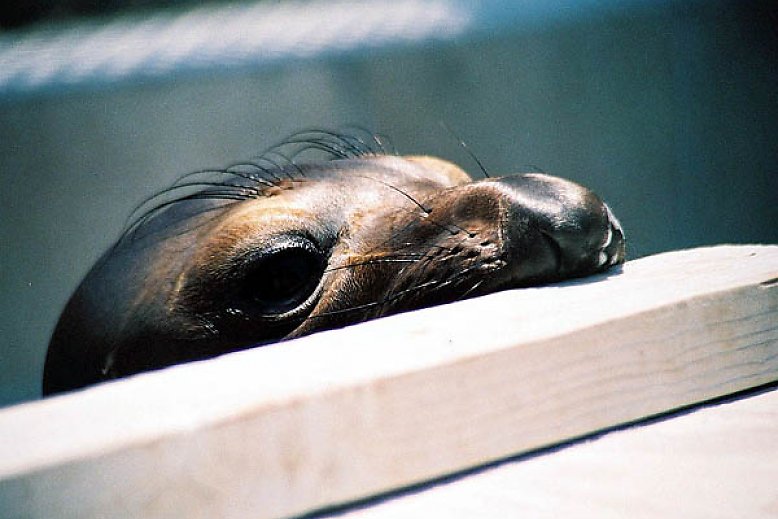 An elephant seal pup peers over the top of a wooden shelter. Hugh Ryono

I’ve been asked by visitors to the Aquarium of the Pacific what my favorite pinniped is. Most of them expect my answer to be either the California sea lion (like Miller) or the Harbor seal (like Ellie) because of how much I work and play with these critters. They are surprised when I tell them that the Elephant seal is actually my favorite. This is the story on why elephant seals are number one on my list.

The northern elephant seal is the second largest seal in the world. It can grow to 14 feet in length and weigh more than 4,000 pounds. Its diving skills rival those of the sperm whale. A northern elephant seal can dive deeper than a mile and stay submerged for almost 2 hours. Their pups can weigh well over a hundred pounds.

One young female of the species had a profound influence on me back during the days when I spent my free time as an animal care volunteer at a center that took in sick and injured seals and seal lions in order to treat them and return them to the wild. The seal’s name was Gimpy.

On April Fools Day 1994, a young elephant seal arrived at the center as a patient. The pup came in suffering from a head trauma that had left her paralyzed on her left side and with limited vision. Being the 21st animal of the year, she was listed as No. 94-21. No one who saw this northern elephant seal pup on her first day at the center thought she would survive the week. Boy, did she fool us! The pup that seemed to have everything going against her would not only survive, but would serendipitously leave a long-lasting legacy. She would become historically significant, a media darling, and a hero. In essence, she would become the seal version of Forrest Gump.

Eventually No. 94-21 regained use of her paralyzed side, but it was apparent that she would never fully recover all of her motor functions. This left her slower and less coordinated than the other seal patients. Because of the special challenges she faced, it took Gimpy a while to master the art of swallowing fish. She had to be hand-fed by volunteers and staff who had to hold her neck straight and steady while gently guiding a sardine down her throat. She was usually very calm and gentle around her caretakers while they helped her to eat.

Jackie, who was in charge of animal care at the center back then took a special interest in Gimpy, guiding her through pinniped physical therapy to help her to relearn how to walk and swim like a seal. With impaired motor skills, her adaptation to the rehabilitation pools was slow. Gimpy was first introduced to a shallow (human) baby pool where she could get used to the water without danger of drowning. One of her favorite activities in this tiny pool was to sit just outside the pool, putting only her head underwater so she could blow bubbles. She seemed to like the sensation of the bubbles on her whiskers.

Gimpy’s first few ventures into the larger pools were done with the center’s staff acting as lifeguards so that we could pull the pup out of the water if she got into trouble. During these sessions, we found that, even though Gimpy could swim, she was not able to negotiate the steep sides of the pool in order to lift herself out of the water. Eventually a wooden ramp was constructed so Gimpy could get in and out of the water with ease. A seal ramp would later be incorporated into the new rehabilitation pool built at the center; a legacy from the lessons learned from Gimpy’s treatment.

By the fall it was clear that, with Gimpy’s limited motor skills, she could never be released back into the wild. A search was conducted to find a home for her. However, there were no facilities in the United States at the time that housed elephant seals (this was four years before the opening of the Aquarium of the Pacific). At first it seemed that there would be no where for her to go, but Jackie persevered and, utilizing her old professional marine-mammal trainer contacts, found a home for Gimpy “across the pond” in Portugal.

In December the necessary papers were filed and a travel container was constructed for Gimpy in preparation for her trip to Europe. The folks at the center did not plan on the snail’s pace of processing the international paperwork. Gimpy would outgrow the container long before the final approval would be received and a much larger one would eventually have to be constructed. Another six months would pass before she would finally be on her way. Jackie used that time to teach Gimpy some basic husbandry behaviors that would make things easier for her in her new home. Jackie trained Gimpy to relax during tactile exams and medical procedures. She even got Gimpy used to taking sponge baths! As a result, when the seal went through a difficult annual molt, a medicated sponge could be used to alleviate the sunburn-like condition of her skin. It was also during this time that I started to spend a lot of time around Gimpy to the point that she got used to me being around as I fed her and cleaned her pen. She never showed any aggression towards me and would in fact just hang out near me as I cleaned her pen. Normally volunteers were instructed not to let wild patients bond with them so as to ease their transition back to the wild but in the case of Gimpy, since she would eventually go to a zoological facility, we actually let her get use to having humans in her environment.

Because she was always at the center, Gimpy became a media favorite. Whenever a local TV crew or news photographer needed an image of a seal, there was Gimpy ready for her close-up! Her face graced many newspapers and newscasts. She also had fans who stopped by the center weekly just to see her swimming in her pen with the wooden ramp.

In 1995, her second spring at the center, Gimpy saw a new generation of Elephant seal pups arrive for treatment. One incident in the midst of this new stranding season assured that I would personally never forget the lovable seal.

Gimpy was housed in a pen with half a dozen current-year elephant seal pups. These pups were teething with newly erupted canine teeth. They were using these new ivories to bite each other and anyone else that came within range. That is, everyone except Gimpy. As a yearling, she outweighed the largest of these pups by well over a hundred and fifty pounds. When confronted by a feisty pup, she merely remained silent using an effective, open mouth warning – bobbing her head in a threatening manner. This caused the troublemaker(s) to remember just how much bigger Gimpy was and to back away.

Yet, in all of the weeks that I watched her use her silent threat, I never actually saw her strike another seal, let alone anything else. It was all a facade. Gimpy was a gentle giant.

We were shorthanded one morning during my shift as an animal care volunteer so I unadvisedly entered a pen by myself to clean up after the morning feed to get the uneaten fish out of the pen and pool. Using a crowding board to protect myself, I maneuvered around the yelping seals to do the necessary cleaning. While I was distracted by an aggressive seal that struck my board, my foot slipped on a half-eaten sardine. The bottom of the board slipped forward as my body belly-flopped to the deck, knocking the wind out of me. Dazed, I looked up to see three angry seals approaching. Each seemed to be intent on trying out their new canines on me! I reached for my board but one of the pups had already moved on top of the now flat and useless barrier, preventing me from picking it up. I knew I was soon going to be a teething ring for a bunch of yelping, aggressive seal pups. Then from the corner of my eye I saw another large mass of seal blubber moving up beside me.

Oh great,'' I thought.I’m going to get it from all sides.”

Then I realized that it was Gimpy. She had picked that moment to move toward me. Perhaps it was to figure out what the commotion was all about. All I knew was that at that moment she became my sanctuary from those attacking seals lumbering toward me. I crawled on my hands and knees over her.

“It’s just me, Gimpy,” I said as I got her between me and the pups.

Gentle Gimpy didn’t even flinch as I collapsed next to her. That is until the yelping pups got closer. Then Gimpy initiated her silent open mouth threat that caused the other seals to back off. Gimpy had saved me from a mauling! At that point I was able to catch my breath, get to my feet and recover my crowding board. To me, she became a hero seal that day (Her rescue of me, greatly edited, even made the pages of Reader’s Digest).

On June 7, 1995, Gimpy started on her journey to Portugal. Waiting for her at her new home was a handsome male elephant seal and a caring group of marine mammal trainers. And what did the trainers name their new elephant seal princess? Gimpy! (They pronounced it “Jimpy.”)

Gimpy is the reason why the elephant seal is my favorite pinniped.