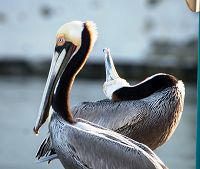 The basking shark near the boat right under the water. 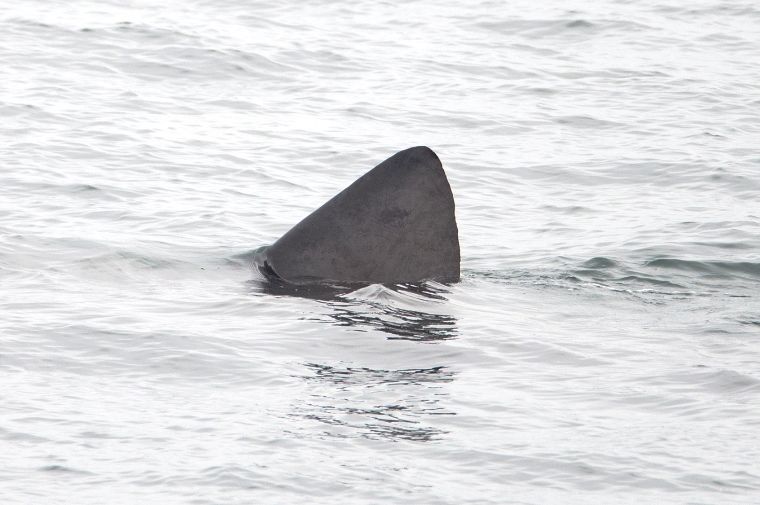 The classic large dorsal fin of a basking shark 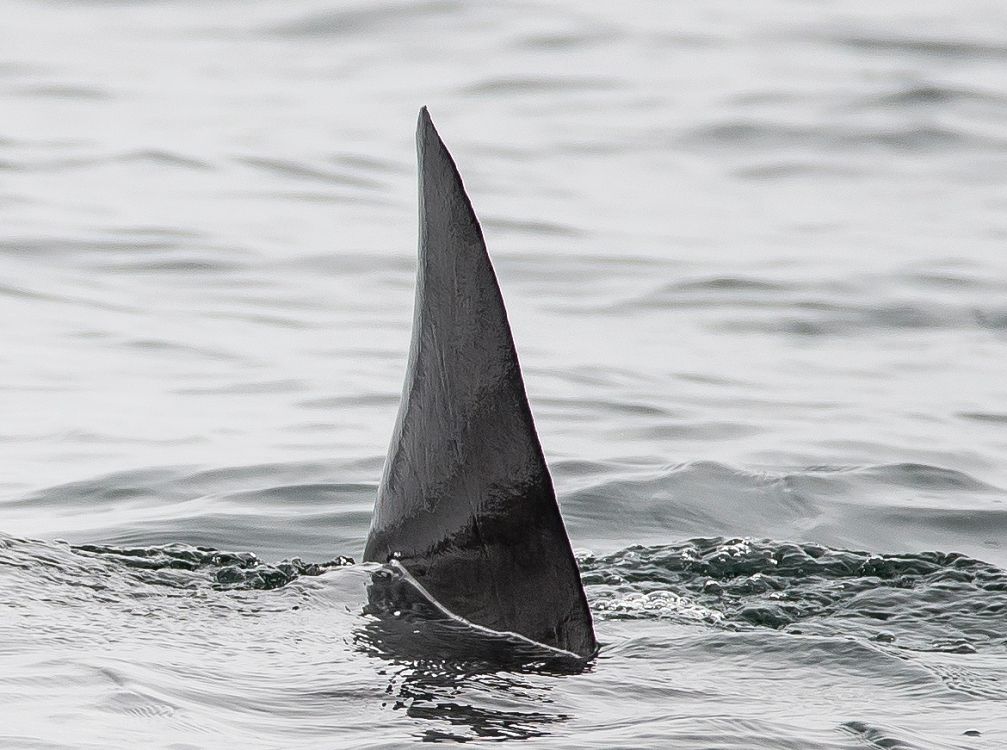 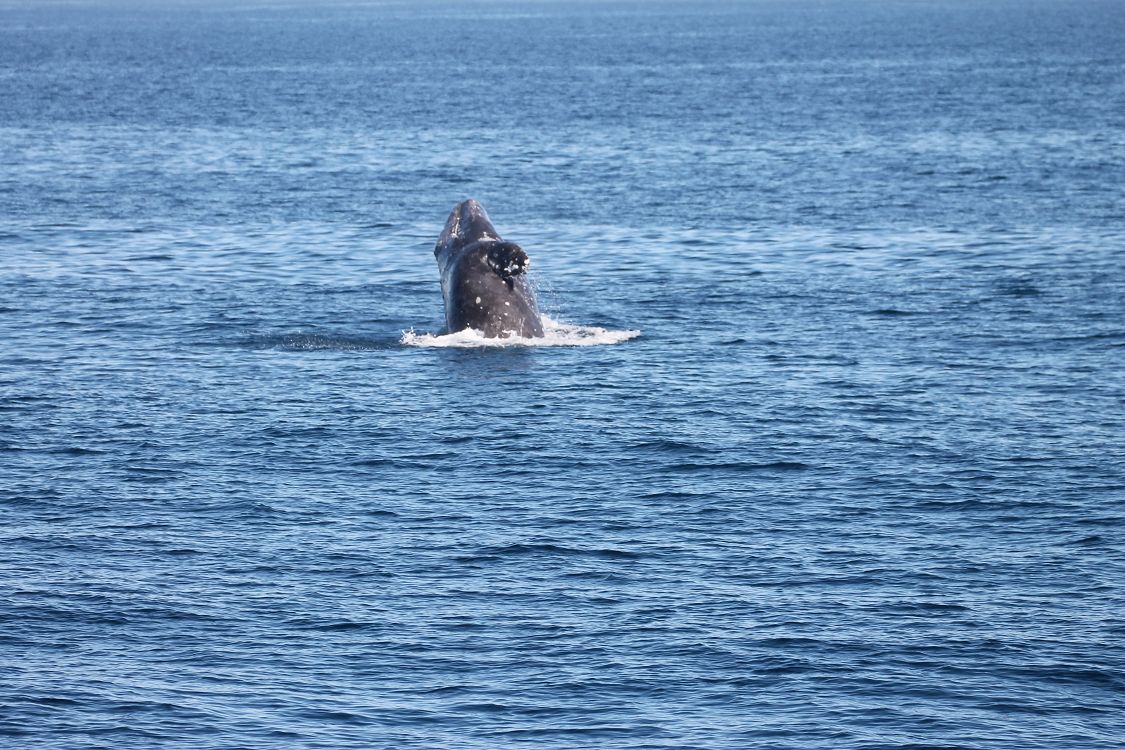 A breaching gray whale from a recent trip! 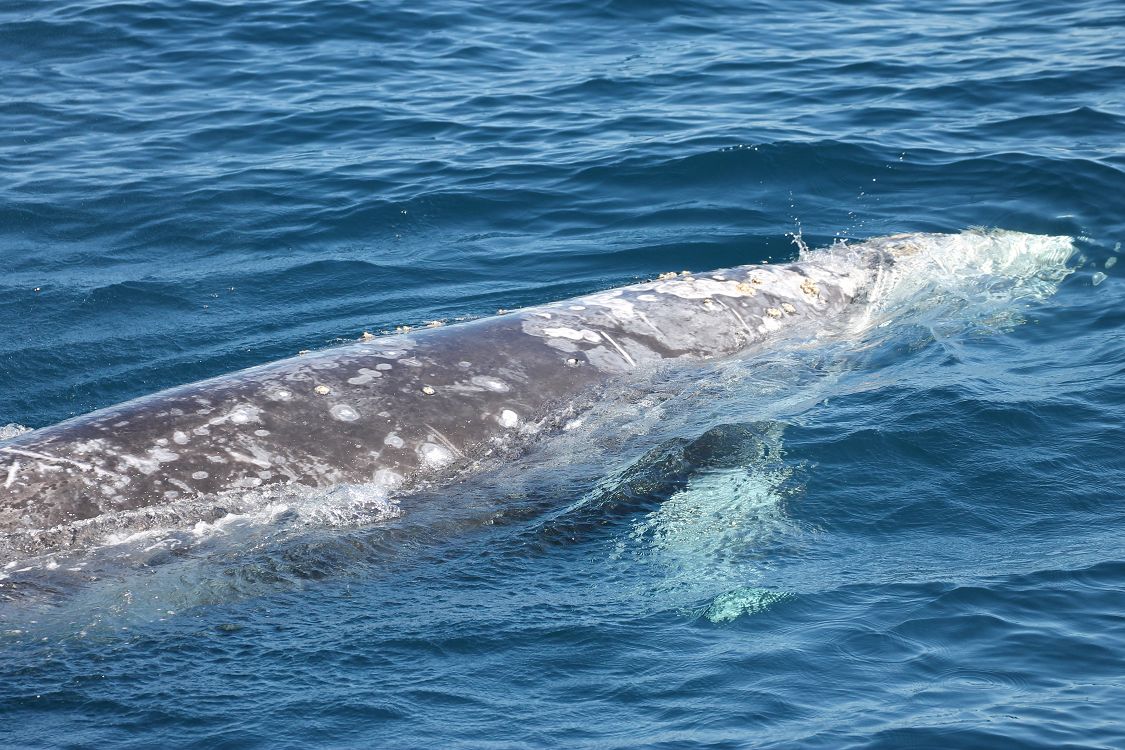 A beautiful up-close photo of a passing gray whale taken by our photo ID interns. 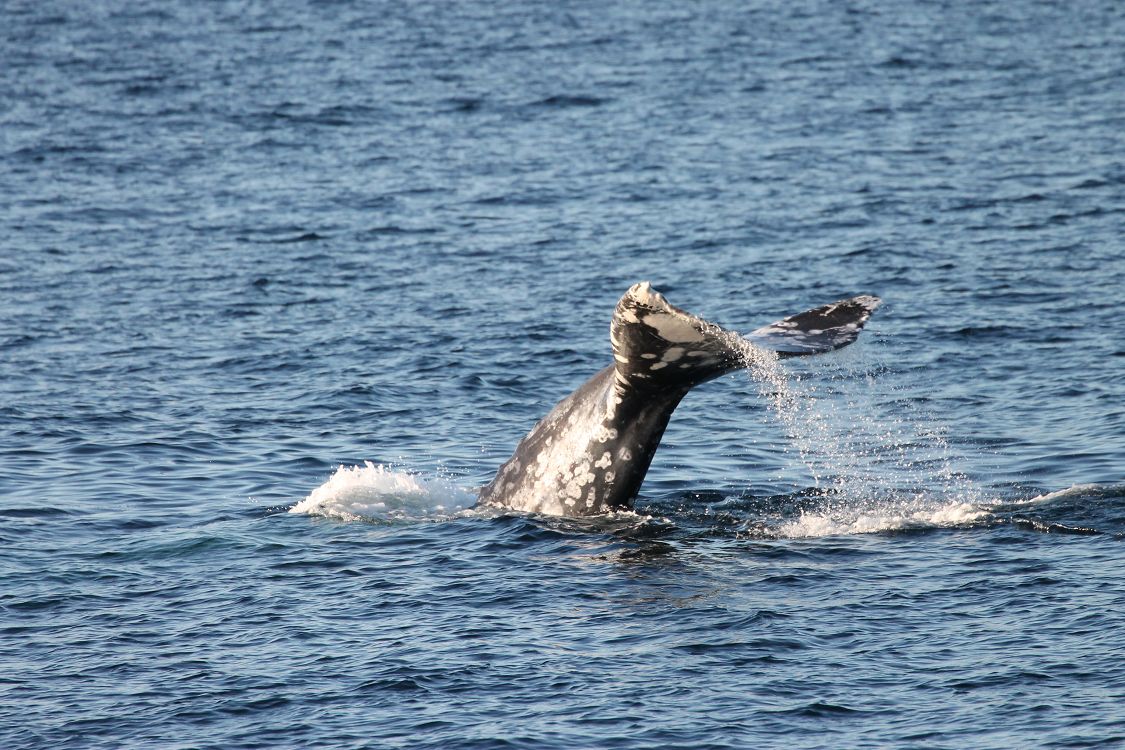 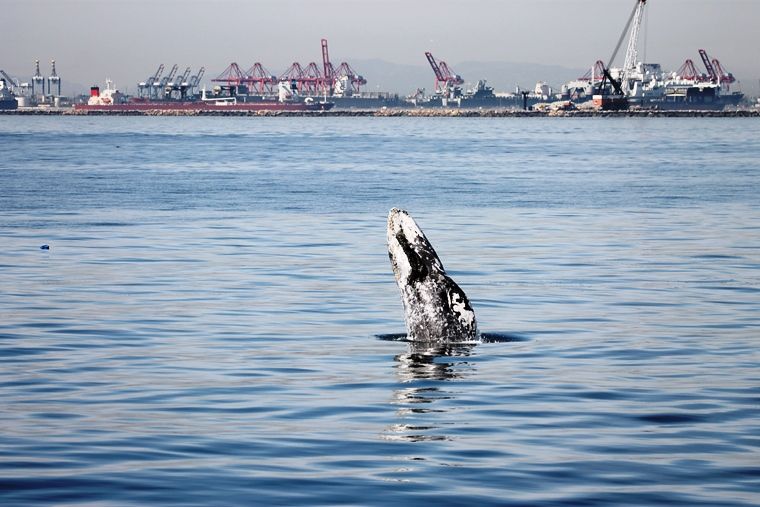 A breaching gray whale who looks like it was snacking on something at the bottom of the harbor! 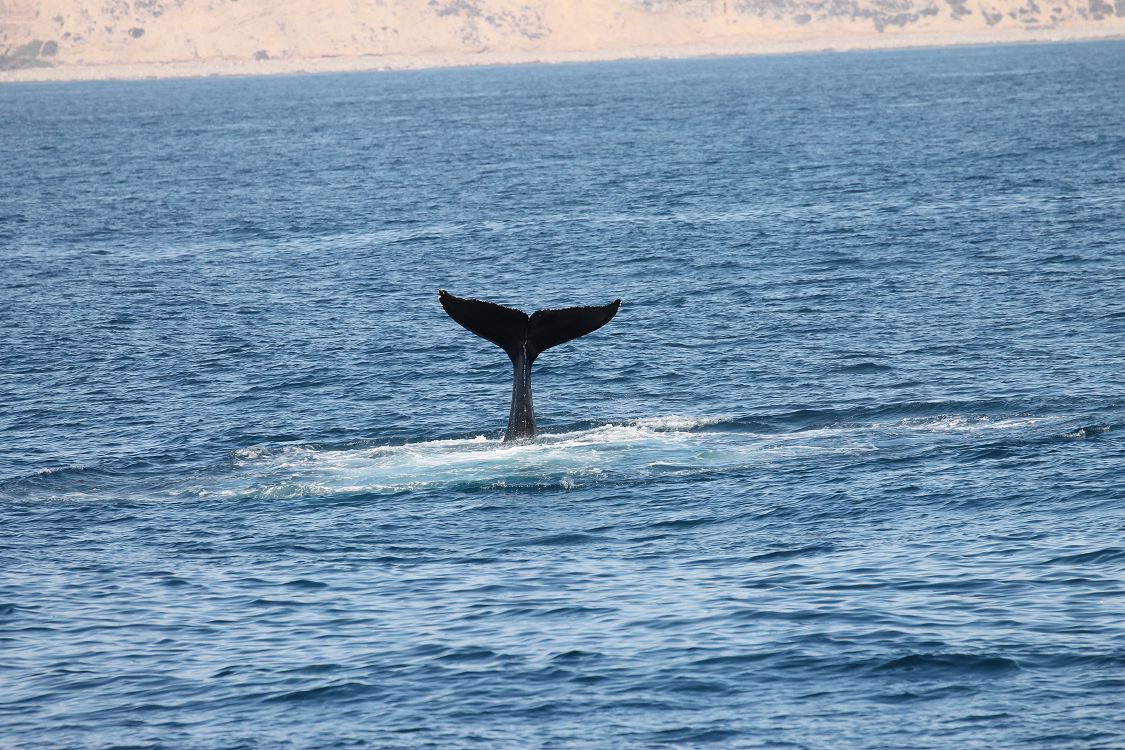 A humpback whale taking a dive. 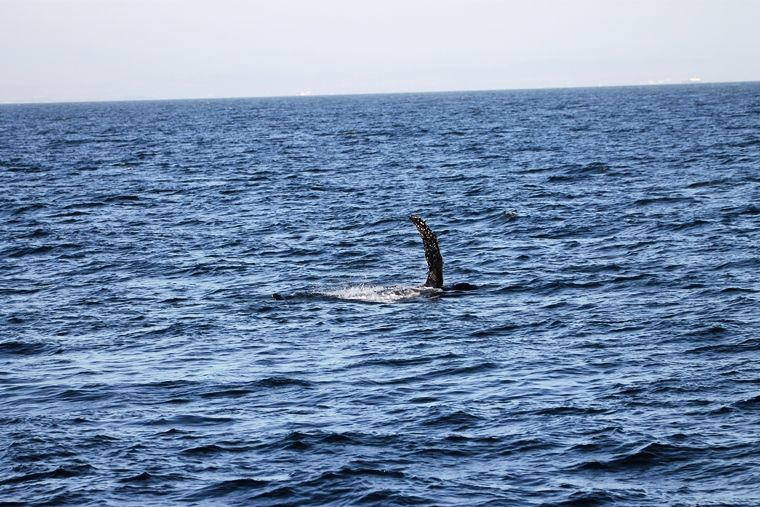 A humpback whale slapping its pectoral flippers on the surface of the water from a recent trip. 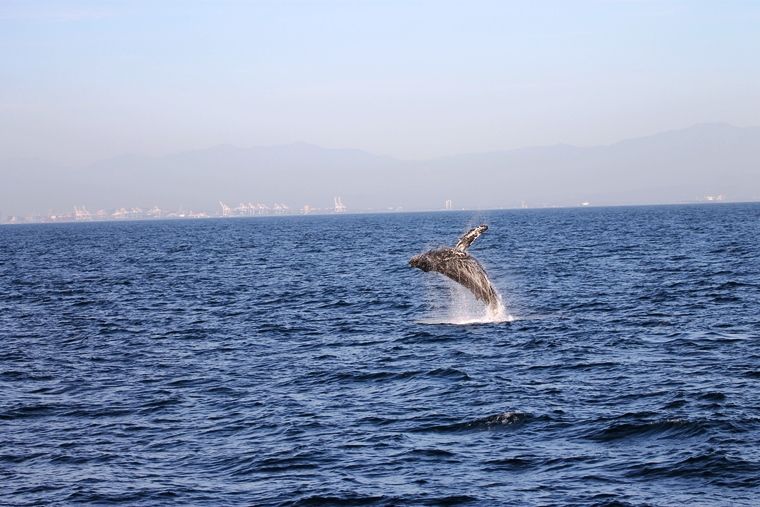 A humpback whale fully breaching out of the water. 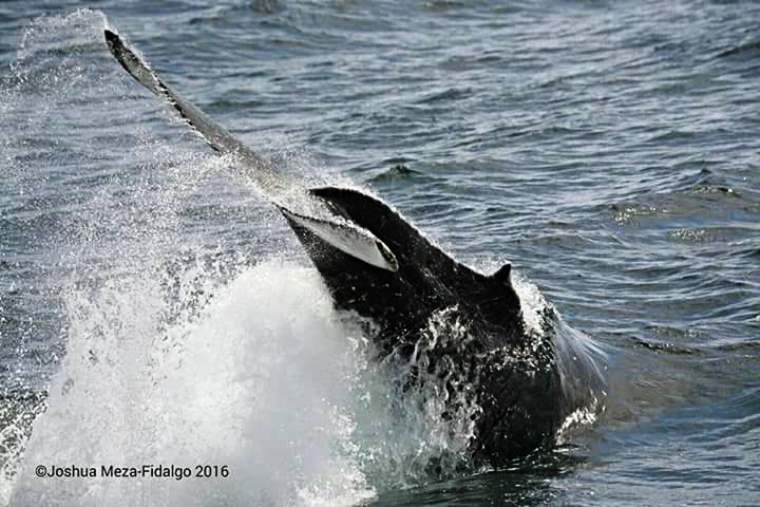 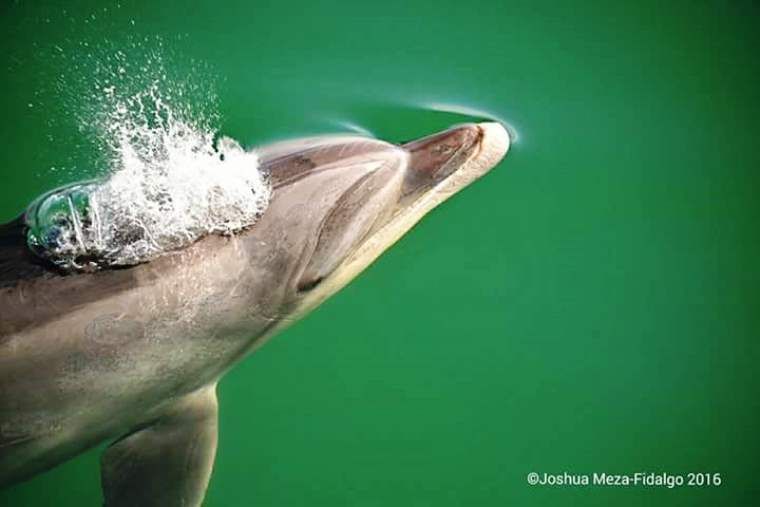 A bottlenose dolphin coming up for air in the shallow waters of the harbor. 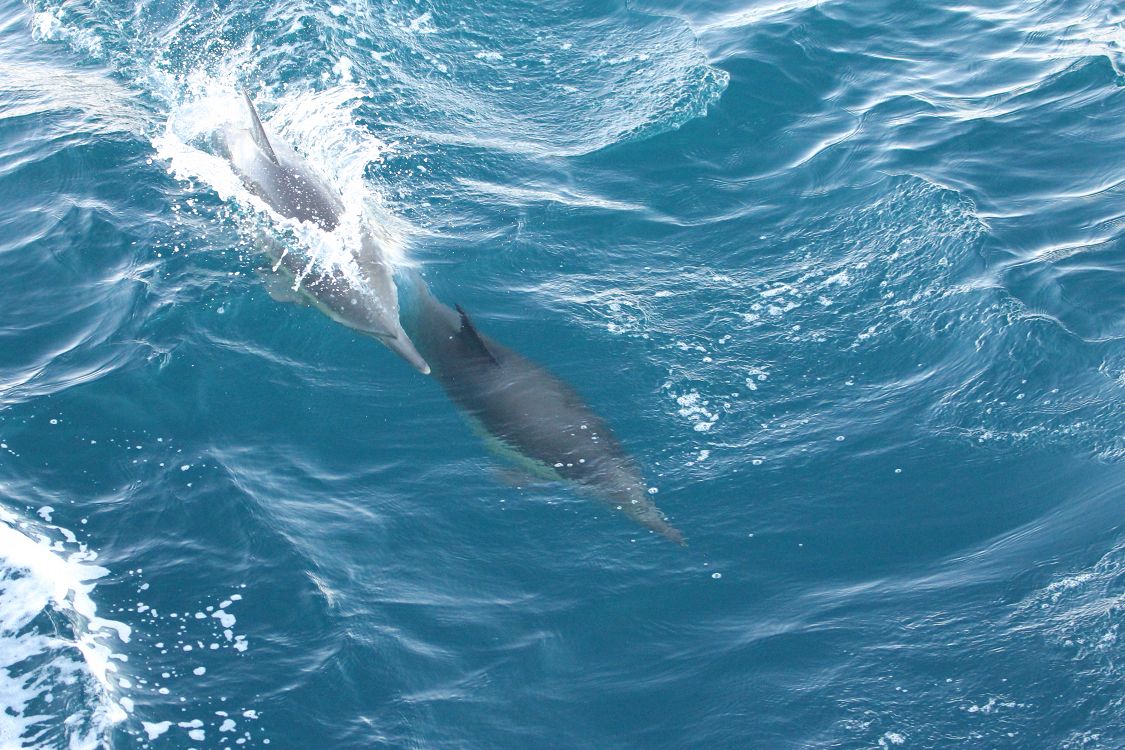 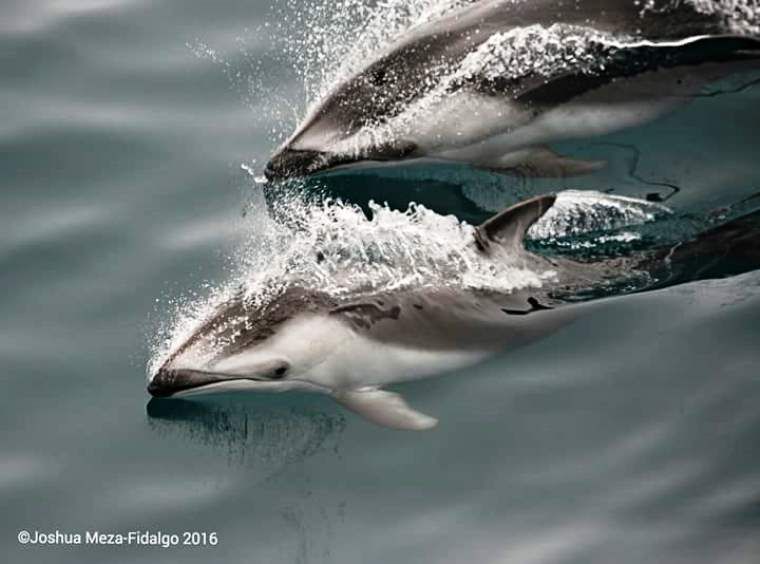 Pacific white-sided dolphins riding the waves near the boat. 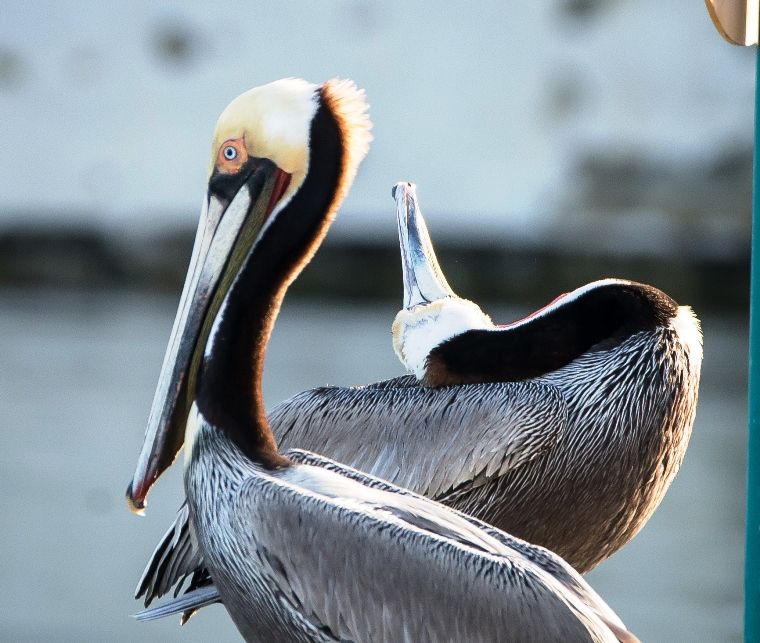 Two pelicans on the dock 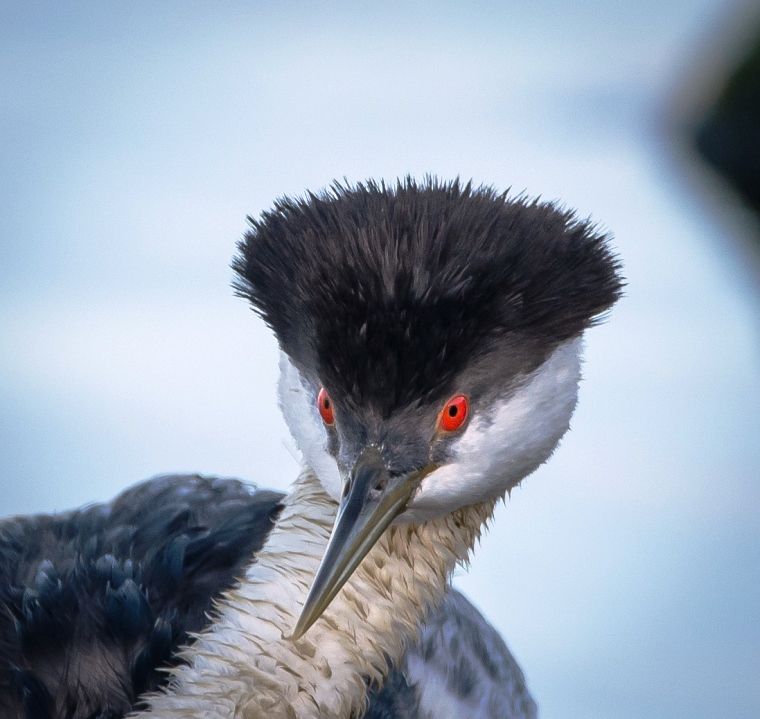 An amazing face shot of a grebe. 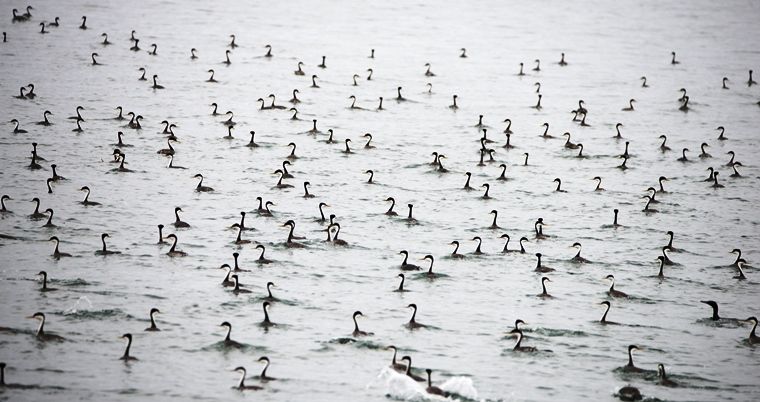 A whole bunch of grebes waiting for a snack on the surface of the ocean during a whale watch.

A family photo of some California sea lions resting on a container ship.

What is a basking shark? It’s basically one of the coolest kinds of sharks and we never really get to see them! We had one a few years ago appear during a whale watch, but this Easter, we got a another sharky surprise! Not only was the shark seen on one whale watch trip during Easter Sunday, but, two trips that day! It caused such a buzz that day that the internet and my phone were both getting a lot of commotion with lots of photos and videos to share! It was such an exciting sighting that I wanted to make sure to get the word out to our whale blog readers soon!

So, you are probably still wondering what a basking shark is. Think of a whale shark, but smaller, darker, and slow going. They are actually the second largest species of shark next to the whale shark and can reach lengths of 20-26 feet long and can weigh an average of 19 tons! The individual seen last weekend was estimated to be at least 15 feet long. They are filter feeders, and feed using a really interesting adaptation called gill rakers that filter out plankton and small organisms through their gills. They also have very large mouths and swim slowly forward to push water over their gills to breathe, and to catch prey. They tend to bask at the surface in the warmer seasons to feed and dive to deeper depths during the winter in search of plankton blooms. They are known to travel in small schools and sometimes mistake boats for another basking shark since they are social sharks. Maybe that is why this one seemed so comfortable being near the boat? They tend to travel in temperate, coastal waters all around the world, and we were very lucky that one decided to come by Long Beach! Maybe we will see more this year?

When I got word that the shark had been sighted, everyone was buzzing around the office about it, and to make it even more exciting, they managed to find it again on the following trip that day! Some of the interns and the crew at Harbor Breeze were able to get some great photos, and even some videos that I will be sharing on this blog, so check them out! Speaking of interns, its time to introduce another one of our new Spring interns, Allee,

“Hola, I’m Allee! I grew up in Santa Clarita and I split my time between my house there and a lovely couch and sleeping bag here in Long Beach. I went to school in Syracuse, NY and got my degree in Wildlife Science and a minor in Marine Science. In high school I fell in love with wildlife and the environment and college helped me fall in love with the mysterious world that is the oceans. My years in school revealed an unknown passion in research (never thought I’d willingly say that!) and conservation. Interning at the Aquarium and being able to learn more about the amazing creatures that live right off our coast has been one of the most amazing experiences. Nothing beats watching a whale breach so close to you that you can feel the mist from the water. I can only hope that the Aquarium will cause you all to fall in love with marine life like I have!”

Be sure to check out some of Allee’s best shots of the animals she has seen during her internship thus far.

Other than sharks, we have been seeing quite a lot of whales on the daily as well! It is still a great time to come out since we have been seeing lots of grays, fins, humpbacks and lots of dolphins! So, check out our great deals that include a whale watch AND Aquarium admission and enjoy the beginning of your Spring and your children’s Spring Breaks!